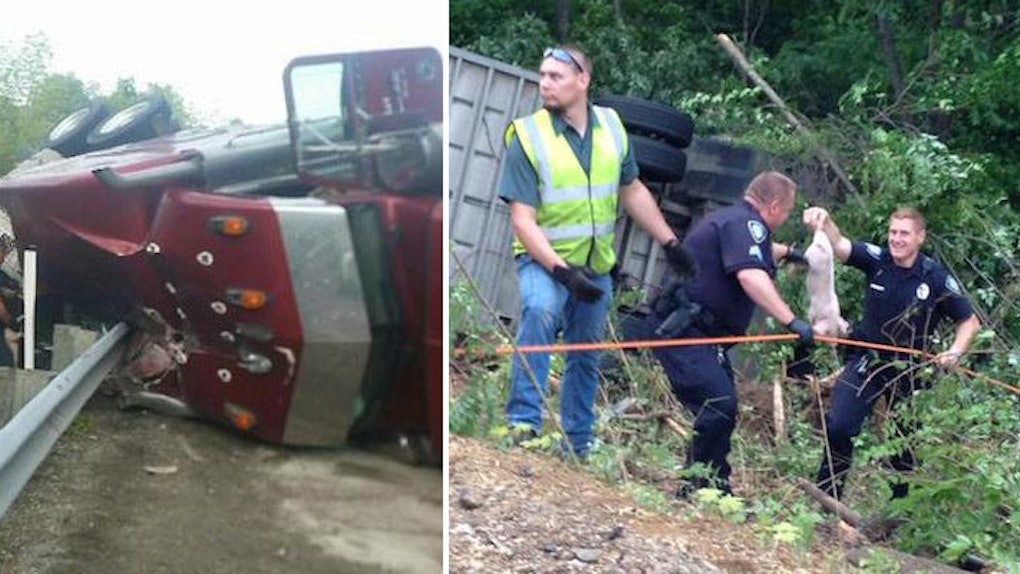 Earlier this year, Sun City, Arizona made national headlines when a pair of sneaky llamas escaped and led police on an hours-long wild goose llama chase.

If they were difficult to wrangle, we don't know how authorities are going to deal with the 2,200 baby pigs that broke free in Ohio last night.

The piglets were being shuttled from South Carolina to Indiana when the truck they were riding in overturned on US Route 35.

Those that survived the crash scooted their wiggly butts into the woods, and local law enforcement officials are desperate to round them back up.

In a statement, the Xenia Township fire chief, Dean Fox, asked locals to call the authorities if they manage to find an escaped piglet.

He admitted he's doubtful authorities will be able to find all the pint-sized porkers and warned they will likely have to euthanize many due to injuries. Tragically, nearly 1,100 baby piggies have already been found dead.

Here's the good news: Local farmers helped safely capture more than half of the babies. News crews on the scene managed to snap some photos of (what I'll call) the Great Ham Hunt of 2015.

The crash occurred at around 7 pm and forced an emergency eight-hour highway closure.

Assisting Xenia Twp with Accident on US 35 - 2200 piglets on board ....crews are chasing piglets all over the scene. pic.twitter.com/2JwIQaiUzv — Xenia Fire Division (@XFDPIO) June 9, 2015

The rescued piglets were picked up at the Greene County Fairgrounds and taken back to their original destination.

Find updates here, and keep the curly-tailed cuties in your thoughts!