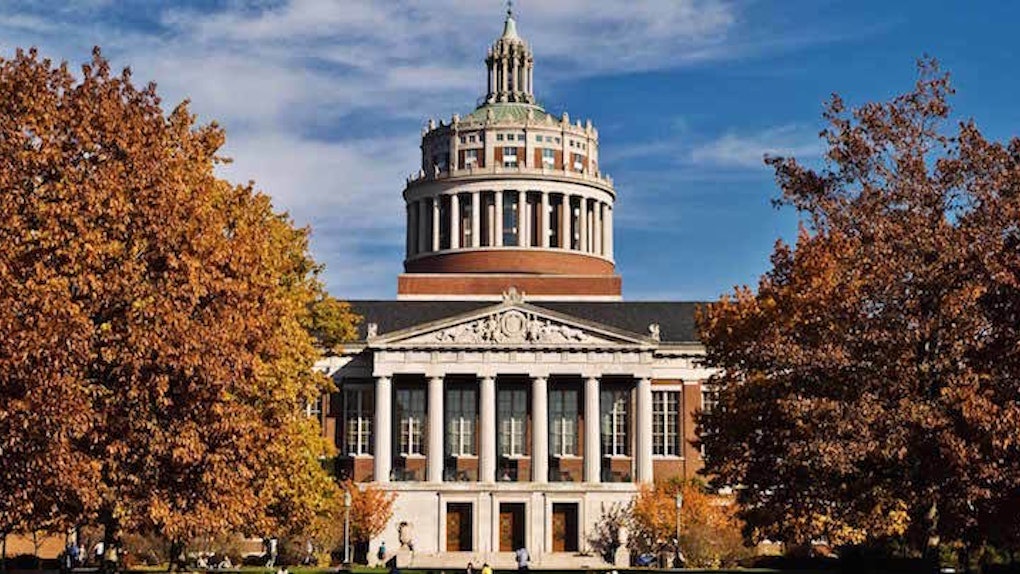 An Open Letter To My Alma Mater On Rape Victims, Panic Attacks And Screwing Up

Hello, University of Rochester. You may not remember me out of the thousands of students who pass through your halls, but I remember you.

I came to you in my third year of college, and left in my fifth with a diploma in my hand. I didn't spend much time with you apart from classes, marathon library sessions and the occasional dorm room hangout.

I didn't party with you, drink with you or do drugs with you. I avoided your frat quad, except to pick up an assignment from a classmate.

I had a full-time job that didn't leave me much time for R&R, and most of my friends went to another school.

And, after reading this piece in the Huffington Post, I'm glad I didn't have that time with you.

According to the article, a freshman named Abigail was raped on October 5, 2014 while drunk. The fact that rape could come to the place I so aspired to study and learn at is a tremendous shock.

I read of these things at other universities, but I never thought you'd be a part of it. I'm disappointed. I hope you feel shame.

The piece doesn't mention how you're handling it, apart from that the alleged rapist admitted in a hearing he and Abigail had sex; the question you need to answer is whether or not she was incapacitated.

It mentions you've updated your policies regarding sexual misconduct.

I never had cause to read them before, but it states, "Sexual assault includes, but is not limited to involvement in any sexual contact when the victim would be unable to consent."

For the record, it also states that consent cannot be given in cases of incapacitation, including drunkenness.

I hope you've executed some measure of delicacy and grace in this situation. I hope you've treated Abigail with compassion and respected her story as a survivor.

I hope you've done more what your campus safety team failed to do; what one of your deans failed to do.

Thirteen days after Abigail was raped, she came across a friend telling a group of other students what had happened to her.

The rape had been officially reported to the university, according to the Huffington Post, but that's not the same as having your personal pain laid out for the public to see.

Abigail had a panic attack.

Whatever normal method of breathing you have is impossible to find. Instead, every ragged gasp feels like it's trapped in a chest being squeezed by a fist.

Sometimes it's easiest to drop to the floor and sob. Sometimes the only way you can get any air into you is to stand and scream.

The world has fallen in on your head and trapped you; sometimes screaming is all you can do to try to find a way out.

Abigail screamed through her panic attack -- her "total mental breakdown," as she told the Huffington Post.

She screamed and cried, and someone called campus security. What they did to her is what I want to take up with you.

Abigail was placed in handcuffs, pushed to the wall and then to the floor, and a male officer held her there with a knee to her back.

All the while, she told him she was a rape victim, and not to touch her. Everyone around her backed her up. He kept her there for about a half hour, according to Abigail.

She asked for her RA or the public safety officer on her assault case. Neither was brought to the scene.

Instead, Abigail was strapped to a gurney and brought to a hospital, where the doctor said there was nothing wrong with her.

Is this how you treat victims of rape? Is this how you've trained your officers to deal with someone having a panic attack? Or, have you not trained them at all for these situations?

I'm not sure which situation is preferable.

To make matters worse, according to a recording Abigail made of a meeting with one of your deans (presumably Matthew Burns, Dean of Students, as TWC News quoted a statement regarding public safety and the Office of the Dean of Students), he said the following:

"It is my business if an underage student is drinking, and there are consequences...So if you want to have that kind of conversation, be my guest."

In a conversation regarding treatment by campus safety with regard to rape and a panic attack, what room is there to speak of drinking?

Obviously you have to get it out of the way, but if Abigail had been brought to the hospital and looked over by a doctor, that would have been clarified one way or another.

The doctor said there was nothing wrong with her. Multiple witnesses confirmed she hadn't been drinking.

So why was your dean so insistent on the alcohol angle? Why not address the actual concerns being brought to him by a traumatized student?

Why would you employ a dean (presumably of students) who doesn't seem to care about the wellbeing of the university's students?

I'm ashamed of what transpired within your dorms, your offices and your campus, and I'm not the only one.

As soon as the Huffington Post article came out on June 21, my fellow alumni expressed their outrage across Facebook and Twitter. I'm writing this to give them voice; to give the witnesses a voice; to give Abigail a voice.

She's since transferred out of your university, and I don't blame her for that decision. Who would want to stay in a place marked by such trauma?

The University of Rochester slogan is meliora, Latin for "ever better." The website states that this is not just a motto, but "an ethic that we share as a community, a way of life that unites us in a common bond and a powerful description of who we are and what we value."

The school has lost sight of that ethic, that way of life, that value.

I hope this experience brings the school back to its beliefs. I hope the school takes this experience and uses it to learn how to treat students better in the future, especially those who have suffered trauma, mental illness and rape.

And I hope when someone asks for a comment on the school's behavior in the future, there is more to say than, "We do not comment on these cases. It is frustrating that we cannot say anything further, but we think that it is the responsible thing to do."

The responsible thing to do, my alma mater, is to take strides to avoid these situations in the future, and to take responsibility for your mistakes.