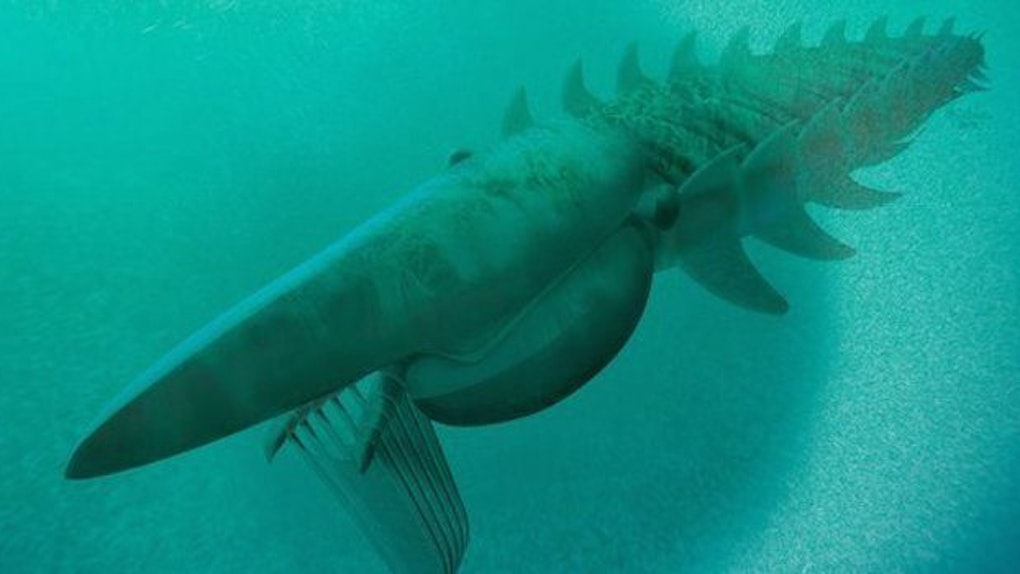 Scientists have unearthed the fossils of a freakish prehistoric sea creature that was a precursor to whales and crustaceans alike.

Remains of Aegirocassis benmoulae were discovered on Wednesday in southeastern Morocco, Reuters reports.

The animal lived approximately 480 million years ago and is an arthropod, the group consisting of crabs, scorpions, spiders and centipedes.

At around 7 feet in length, Aegirocassis was Earth's largest animal at the time, and it's likely everything the giant encountered was half its size at most.

Its hanging head appendages made it a member of the now-extinct family known as anomalocaridids.

But while its peers used these tools to snare big fish, Aegirocassis instead decided to take advantage of the massive influx of plankton in the ocean during the Ordovician Period.

The appendages' bristles trapped the tiny prey much like the way modern-day whales filter plankton out of salt water.

This made Aegirocassis the first large animal to practice this feeding method, said Dr. Allison Daley of Oxford University.

These animals are filling an ecological role that hadn't previously been filled by any other animal. While filter feeding is probably one of the oldest ways for animals to find food, previous filter feeders were smaller, and usually attached to the sea-floor. We have found the oldest example of gigantism in a freely swimming filter feeder.

Another important feature of the animal's anatomy are the two sets of flaps on each side of its body.

Previous fossils of anomalocaridids had just one set of flaps, suggesting that Aegirocassis was crucial in the evolution of the body type that would later be taken on by shrimp.

All this knowledge of Aegirocassis may not have been possible if the fossils weren't so well-preserved, according to Sci-News.

The majority of other anomalocaridid fossils had been flattened over time, but for some reason, these bones were able to maintain their 3D shape.

Aegirocassis benmoulae takes its name from Mohamed Ben Moula, who is the Morroccan digger who first came upon the fossils.