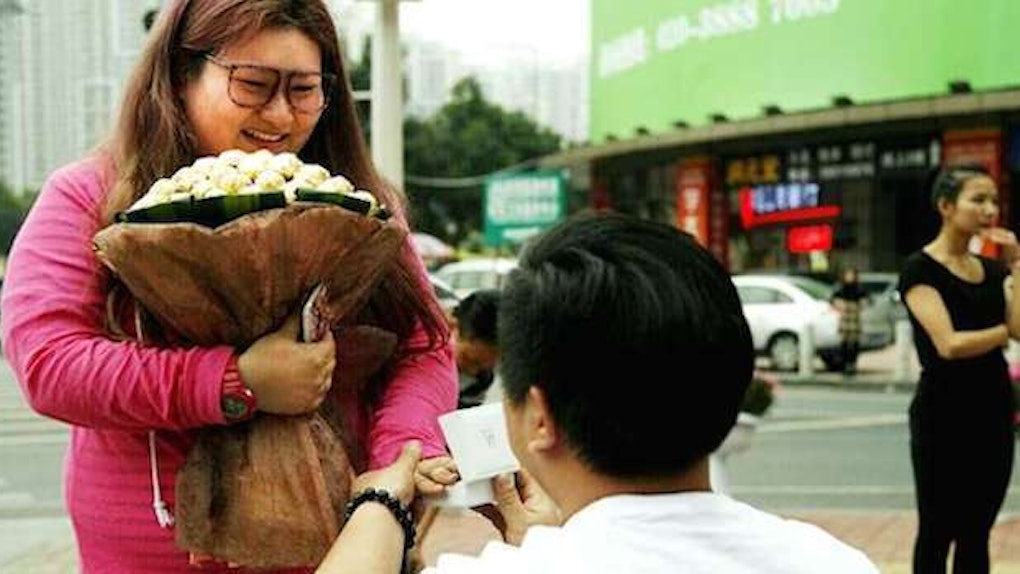 A Chinese woman has agreed to marry the man who forced her to eat so much, her body weight doubled.

It was around this time when she started dating You Pan, who was extremely paranoid about his girlfriend attracting other men.

So the 25-year-old devised a plan to feed Tai gigantic meals in order to eliminate the pool of willing suitors.

Pan reportedly spent loads of money every day to make sure Tai ate only the largest of breakfasts, lunches and dinners.

He would even wake her up in the middle of the night to give her snacks.

Luckily, Pan seems to have found a dormant food addict that just needed some encouragement to come out because Tai didn't seem to mind the treatment.

She gained over 90 pounds thanks to his feeding.

She now looks nothing like her former self, which apparently meant it was time for Pan to take their relationship to the next level.

He proposed with a bouquet made of chocolates in front of a strip of their favorite restaurants.

Tai happily accepted in front of their friends, who were holding up pictures of some of the foods that led to the woman's transformation.

Pan intends not only to keep treating Tai to big meals when she becomes his wife but also to stuff her face even more.

Citations: Woman who was fattened up by jealous boyfriend to deter love rivals says yes to marriage proposal after two years of binge eating (Daily Mail)