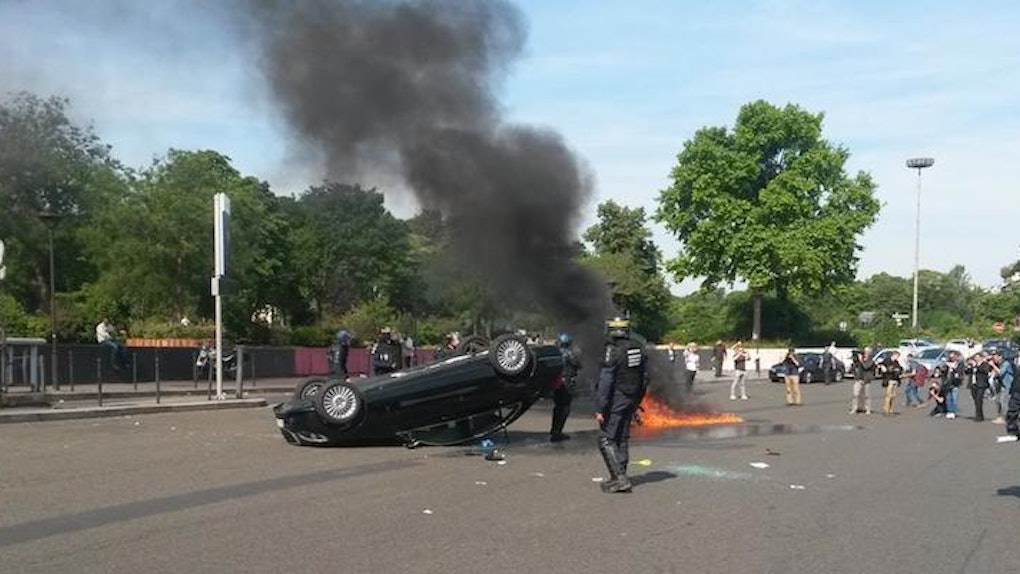 The drivers burned tires, assaulted Uber drivers, flipped cars over and set up blockades to airports and train stations in Paris, according to The Verge.

A tweet from Courtney Love Cobain says the driver of her car was taken "hostage" by protesters.

Dude @kanyewest we may turn back to the airport and hide out with u.picketers just attacked our car #ParisUberStrike pic.twitter.com/MtanurybOO — Courtney Love Cobain (@Courtney) June 25, 2015

Cobain only escaped from the chaos by paying a passing motorcycle driver to give her a ride to the airport.

We are faced with permanent provocation (from Uber) to which there can only be one response: total firmness in the systematic seizure of offending vehicles. We are truly sorry to have to hold clients and drivers hostage. We're not doing this lightly.

The demonstration, which was fueled by thousands of drivers, eventually grew so violent, police had to resort to tear gas.

It comes days after taxi drivers summoned Uber cars, and under the guise of customers, they guided the drivers to secluded places and attacked them.

French taxi drivers have been protesting Uber for years, largely because of the ride-sharing app's UberPOP service.

UberPOP employs drivers who do not have the licenses required for taxi drivers. Licenses can cost as much as the equivalent of $270,000 per-driver.

All chauffeurs have been legally obligated to carry licenses in France since the beginning of 2015, but UberPOP is yet to be officially deemed a violator of this law by a constitutional court.

The legality of the service will be determined in a court case that began last Tuesday.

Bloomberg Business reports in a little over three years, Uber gained approximately one million French users, 250,000 of whom subscribe to UberPop.

A French taxi union claims the service and others like it resulted in French taxi drivers seeing a 30 percent to 40 percent decrease in revenue over the past two years.

The service is already banned in the French cities of Strasbourg, Marseille, Lyon and Nantes.