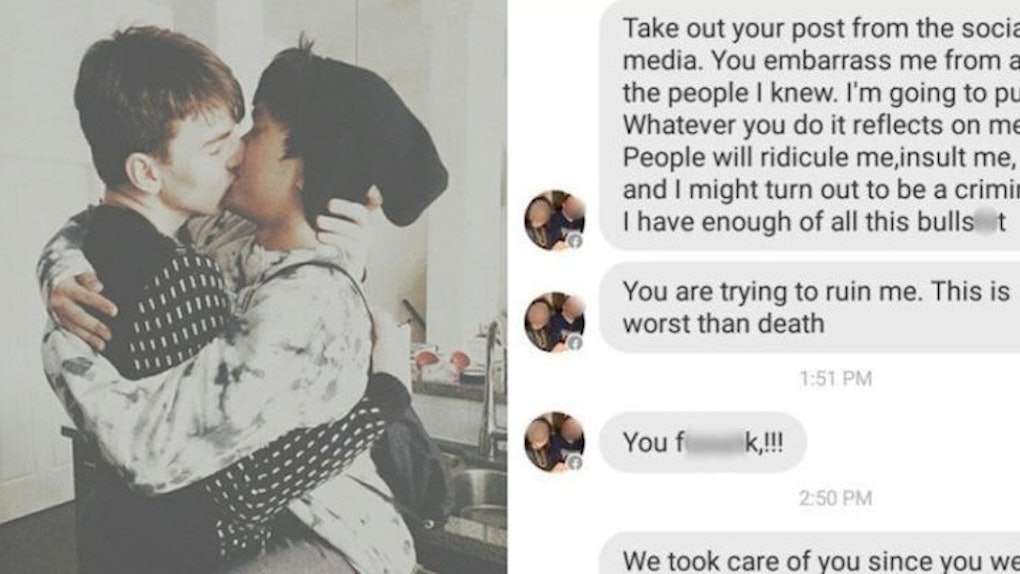 Father's Reaction To His Son Coming Out Is Horribly Disturbing

A Vancouver teenager who came out to his dad only wanted love, but it's the furthest thing from what he received.

In December, a 15-year-old Tumblr blogger known only as Tyler made the choice to finally discuss his sexuality with his family.

Although his sisters and mother offered their support, Tyler received only vitriol from his father.

Tyler's father sent him a series of hateful Facebook messages, writing of his disappointment and fear of rejection by his own friends for having a gay son.

Screenshots of the conversation, posted to Tyler's Tumblr, received more than 2,000 shares.

Even so, the teenager told Huffington Post he can't muster up hatred for the man, adding,

I'm hoping there's still the possibility that he could change, even it takes while. Maybe he could accept me, because that's all I want... I just want him to be there for me.

Although Tyler hasn't found support from his father, he's found an entirely new network of friends through social media platforms like Tumblr and Twitter.

People need to know there are so many other people who would want to love you and be your friend, so (that's) what really matters.

As his post continues to go viral, Tyler reportedly finds solace in the fact his father may come around one day.

Until then, he's taken up residence with a pair of aunts.

Tyler posted his father's hateful messages to Tumblr, saying, "Can't even say it to my face smh."

He's since received an outpouring of support through social media outlets.

@tylerblvr - family is for you to choose. You are not alone. You are a brave soul for reaching out. Stay safe..#LoveIsLove — Jeff milligan-Lujan (@milligan_jeff) March 10, 2015

@tylerblvr @WipeHomophobia you have support around the globe. Try to find strength in this. be yourself and be around people who like that — Jeff milligan-Lujan (@milligan_jeff) March 10, 2015

@tylerblvr I'm very sad about your Dad's choice, but am so proud of you for standing up for who you are. Stay strong. You are a great person — Lorita Nixon (@Momfrog1) March 14, 2015

@tylerblvr you are an amazing young man. I would be proud yo have a son like you. — Michael Southerland (@SilverhandLA) March 15, 2015

Tyler has no plans to let his dad keep him down.