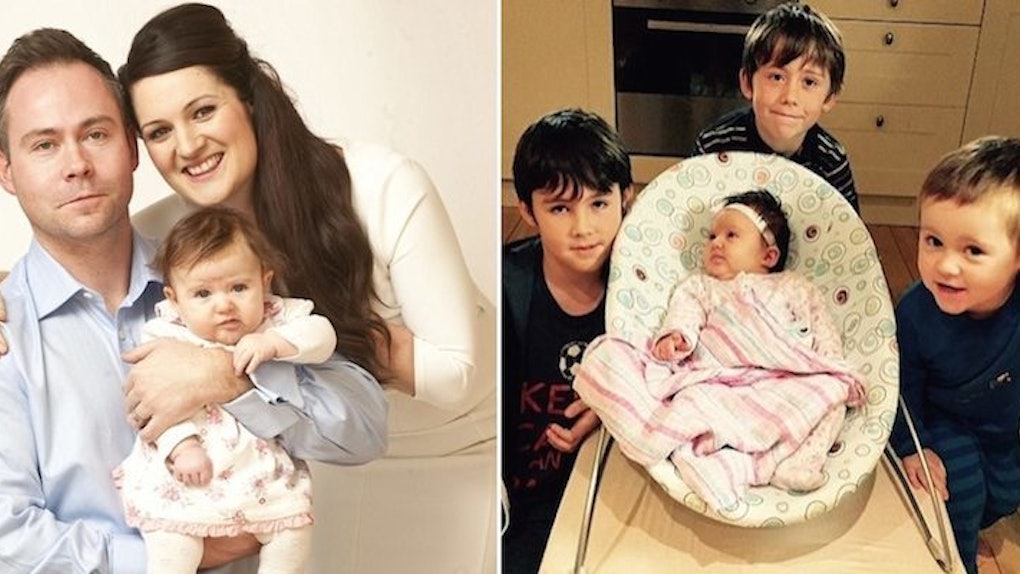 Myla Lawrie, just 4 months old, has more than 200 years of expectations riding on her.

The little girl is the first girl born in her family in five generations, following a great-great-great aunt who was born in 1809, the same year as Charles Darwin, Abraham Lincoln and Edgar Allan Poe.

And Myla might not have just happened by chance, either. Her mom, Hannah, did plenty of research into the best ways to conceive a girl.

With a son of their own and two boys from 33-year-old Mark's previous relationship, Hannah and her husband were ready to bring a daughter into their Maidstone, Kent home in England.

Hannah told Daily Mail she'd originally hypothesized the men in the Lawrie family had a genetic disorder that led to them only producing Y chromosome sperm, which determines the sex of the baby, but that didn't seem to be the case.

I asked numerous doctors and consultants in the hospital where I work if this was the case, but was told time and again that it wasn't. Every time a baby is conceived, the chances of it being a girl are 50/50, they told me — but in Mark's family, for some reason, it never was.

Hannah settled on a 1960s idea called the Shettles Method, which has those trying for a baby girl have sex earlier in the woman's cycle and then stop completely.

It's based on the idea that X chromosome sperm are slow but survive longer.

When Hannah finally conceived, she was fully prepared to welcome another son. But, at her 20-week doctor appointment, she and Mark received the good news.

Myla is the lucky recipient of pink clothing and princess-themed gifts from overjoyed family members.

Hannah said she's so happy, she doesn't see any harm in going a little over the top, saying only, "I can't resist."

She added that with four children in the house, the family is complete.

The happy mother said, "If I'd had another boy, I might have had another shot at a girl."

"But now that I've got one of each, I've got everything I've ever wanted."