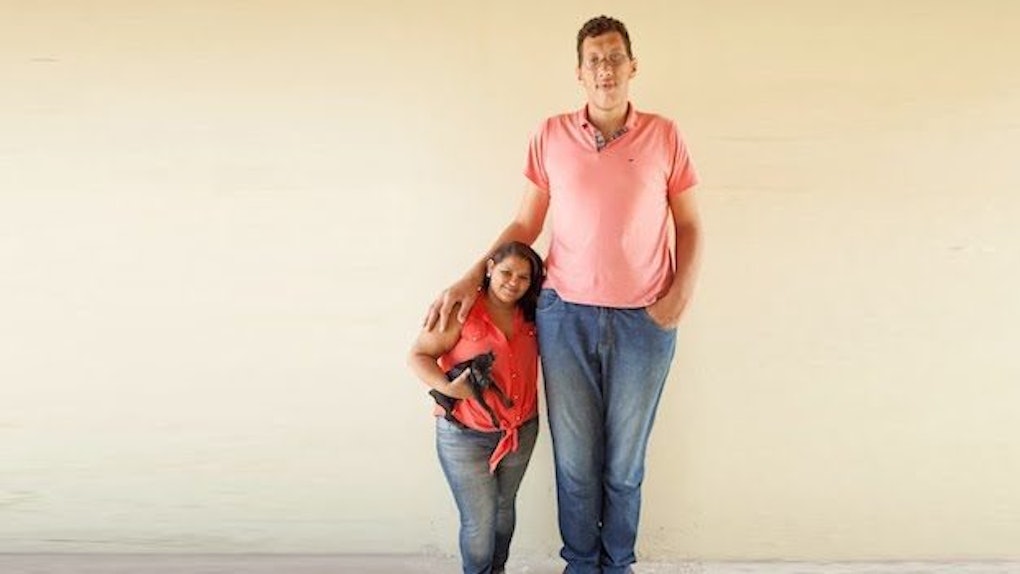 Brazil's Joelison Fernandes da Silva grew up believing he would only be seen as an oddity.

He was made fun of so much in school that he eventually dropped out.

His self-esteem would flourish, however, after having an operation when he was 21 that removed a benign tumor on his pituitary gland.

The Brazilian's growth had been halted, and his newfound confidence without gigantism allowed him to take pride in those who stare as he walks by.

But when he was spotted by 21-year-old Evem Medeiros about a year ago, da Silva found himself staring right back.

He said, according to the Metro,

The day I saw her, I think it was love at first sight.

She's just 5 feet tall, but da Silva insists he and his wife are enjoying plenty of intimacy.

I think the size of my feet is false advertising. Our love life is normal. We adapt. Lying down, everyone is my size.

Medeiros is lucky enough to have a father who embraces her husband's height.

He told me, 'Daughter, I told you to get a man, a great man. You exaggerated.'

The couple is now trying to have a child.

Citations: 7ft 8in gentle giant finds love with a woman almost three feet smaller than him (The Metro)