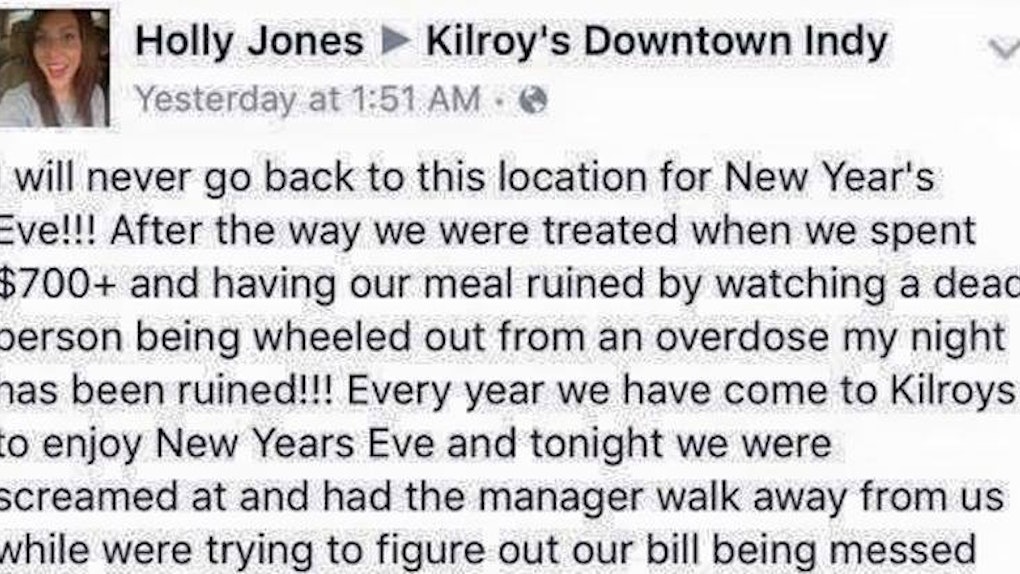 An Indiana woman attained mass condemnation after complaining about a restaurant staff's choice to take its attention off her table and on to a heart attack victim.

She wrote on Facebook her night was "ruined" because a "junkie" overdosed, preventing staff members from correcting her table's bill on time.

According to FOX 59, the "junkie" who Jones believed overdosed was actually a woman in her 70s who had a heart attack and nearly died before being revived at the hospital.

Chris Burton, a manager at Kilroy's, replied to Jones' post to tell her his employees were extremely emotional because they believed the woman died.

This poor lady, who was celebrating New Year's Eve with her husband and son, had to be placed on the floor of a completely packed bar and have her shirt removed in front of everyone so the paramedics could work on her. But I completely understand why you think being intoxicated assh*les that didn't understand your bill should take priority over a human life. I especially appreciate you making your server (who doesn't curse) cry as well... I personally had to leave a show to take a phone call from an emotional manager telling me someone died at Kilroy's and that other employees were not doing so well dealing with this. (At the time they didn't know that she was going to make it.)

Burton added he is glad Jones won't be returning to Kilroy's because he would never want "anyone as cold hearted and nasty" to return.

Jones took down her Facebook profile after being bombarded with hateful messages.

She claimed her account was hacked and said she did not write the post, according to Daily Mail.

Kilroy's, on the other hand, received compliments from around the world due to the restaurant's quick response to the medical emergency.

The salon issued this statement in response.

Serenity Salon is aware of the most recent negative publicity surrounding one of our Booth Rent Stylist. The posting to... Posted by Serenity Salon on Sunday, January 3, 2016

On January 3, the daughter of the heart attack victim created a GoFundMe page to help pay for her mother's medical bills, along with "any needed therapy" her mother might need.

Tohnna Wymer wrote on the page her mother is in critical care but will eventually regain consciousness and begin "a long road of recovery."