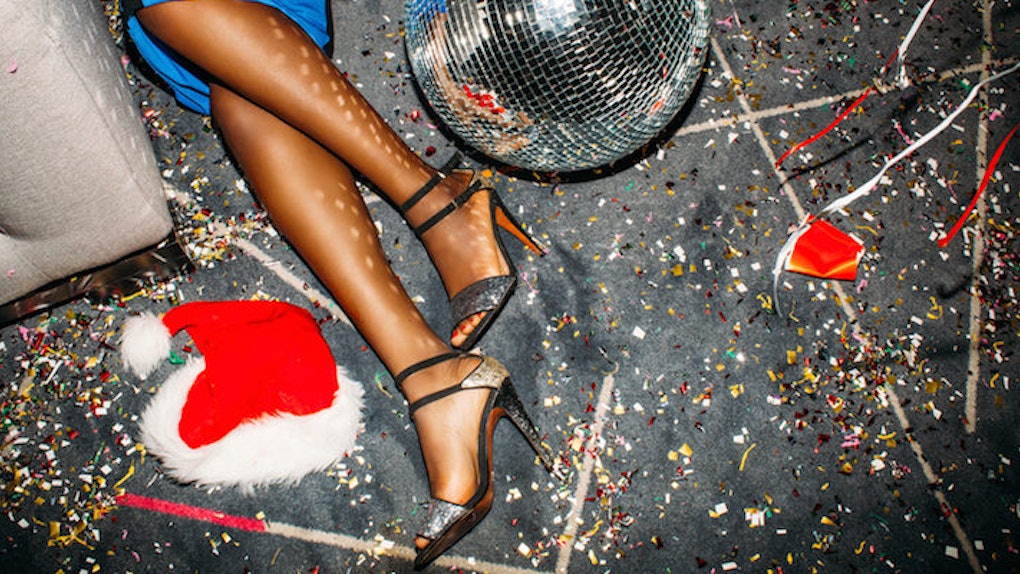 High heels can be a blessing and a curse.

I mean, sure, a pair of sky-high stilettos can perk up your booty and do absolute wonders for your legs.

However, enduring the excruciating pain that comes with wearing high heels all night is a special type of hell that most women wouldn't wish upon their worst enemies.

Not to mention, hobbling around like a newborn baby giraffe when your heels start to hurt is anything but cute.

Lorraine Burnett, a 37-year-old woman from Dunfermline, Scotland, recently learned just how bad high heels can be after she wore a pair of five-inch heels to a Christmas party back in 2008 and ultimately lost her leg.

Burnett had bought the heels for a holiday pub crawl and danced in the shoes all night, despite the fact that they were painful and seemed to be causing a pinching sensation.

When Burnett got home later that evening, she discovered a pretty bad blister on her left foot.

Now if you've ever worn a new pair of shoes out for an entire night, blisters are a pretty common occurrence.

So Burnett didn't make too much of a fuss over it and simply patched herself up.

Being a carer, I knew what I needed to do – just clean it and dress it. But after a week, it was so painful so I went to the doctors and was prescribed antibiotics. I really thought they would help as it just seemed like a bad wound.

But it turns out this blister was worse than she initially thought.

The wound became so bad that Burnett couldn't walk normally and it even affected her ability to get things done at work.

After the blister continued to plague Burnett with repeat infections for the next two years, doctors finally told Burnett the lower part of her leg would have to be amputated.

Burnett has finally decided to speak out about the awful experience and revealed that all she wants is a new leg to replace the standard prosthetic given to her by the NHS.

She created a GoFundMe page to raise money for a new limb that will look more realistic and allow her to feel "like a lady" again.

A new leg would mean a new life for me. It breaks my heart to think my five inch heels cost me my leg.

Burnett also opened up about the decision to amputate her lower leg, saying,

I'd had infection after infection so medics said they would debride the wound, by removing the contaminated skin.

But after the procedure, she was faced with a heartbreaking dilemma: She could spend the rest of her life suffering from reoccurring infections or amputate her lower leg.

After doctors urged Burnett to go for the amputation, she underwent a five-hour-long surgery to remove her lower leg in November 2010.

Burnett revealed how much losing her leg affected her daily life, stating,

I had to give up my job, which was heartbreaking. I couldn't believe how much my life has changed over a couple of years. I'd gone from someone who liked to go out all the time – a real party girl who enjoyed the good life – to pretty completely housebound.

She suspects her Type 2 diabetes may have played a role in the repeat infections that caused her to lose her leg.

Plus, those with diabetes tend to heal slower than others, which can cause things like undetected skin wounds and ulcers to escalate into serious conditions that can ultimately require amputation.

As a result of her diabetes, Burnett frequently experiences painful ulcers from her prosthetic leg that sometimes become infected.

In fact, Burnett was even put into an induced coma due to an infection on her leg in 2014.

Burnett's eye-opening story serves as a good lesson that you should always listen to your body and put your health before your appearance.

If you'd like to give Burnett the gift of a new leg, you can donate to the cause on her GoFundMe page.

Citations: Woman lost her leg after getting a blister from dancing in her high heels (Metro)