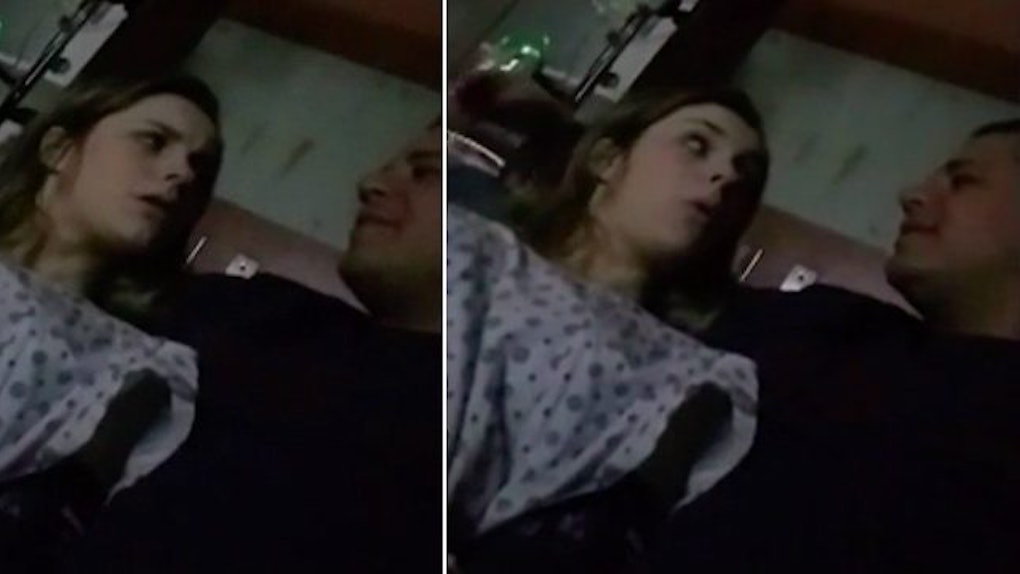 Woman High On Painkillers Forgets She Had A Baby In Video

A woman was so high on painkillers after giving birth to her son that she thought her newborn baby came out of her bellybutton.

Tisha Heffron was dazed after being given painkillers at the hospital post-birth on Monday morning, and her husband documented her confusion in a hysterical video.

In the footage, which James Heffron filmed from San Diego, California, Tisha appeared oblivious to the fact that she just gave birth to her second child and asked James if he was her mother.

Whatever painkillers Tisha was given must've been strong AF because I've never seen someone so oblivious in my entire life.

In the beginning of the video, Tisha wakes up from a nap and completely forgets the fact that she just gave birth to her second son.

James remains calm and assures his wife she just had a baby, and she responds with utter confusion.

Wide-eyed and concerned, she says, "To who?!," and her husband points to their new baby, Clay.

A few moments later, Tisha stares intently at James and asks him if he's her mom.

After he assures he is not her mother, she asks him if he is her brother, and he tells her "that'd be weird" because they just had a child together.

WHAT KIND OF DRUGS IS THIS CHICK ON?

Referring to the "surprise" baby, Tisha asked James if she pushed her newborn child out of her bellybutton.

Not quite... different hole.

To clear up her confusion, James breaks the news that her baby came out of her vagina. She quickly becomes horrified and asks her husband where her vagina is in a state of minor panic.

In fact, she's so concerned that she lifts her hospital gown up to check if her vagina is still there, and then asks James if he has a vagina, too.

He politely says, "no," and informs her he has a penis.

Again, I don't know what kind of drugs Tisha was given, but they must've been the strongest prescription available... because DAMN.

At the end of the video, the new mother-of-two grows concerned about the baby moving in the corner and asks James whose child it is.

Yours! That's why we're here.

I give James a lot of credit because I definitely would've started cracking up halfway through their conversation.

Although he found her obliviousness hilarious, he was definitely relieved when she woke up from the drug-induced dreamland.

Straight away she remembered Clay and the whole birth process -- that was a relief. Once Tisha had woken up from her drug-induced hibernation, she was fully cogent.

Citations: Hilarious video captures the shocked reaction of a new mother who FORGOT she had given birth because she was still high on pain medication after labour (Daily Mail)