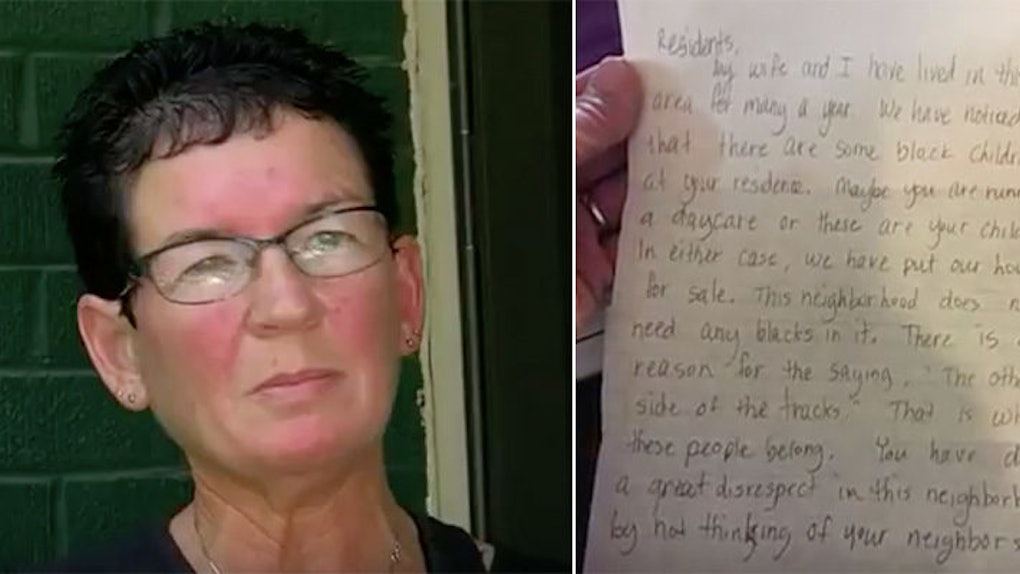 Woman Gets Disturbing Letter: 'Neighborhood Doesn't Need Any Blacks In It'

The message Nancy Wirths received from an anonymous neighbor was straight-forward and direct: We don't want your grandchildren here.

The 49-year-old grandmother told her story to a local reporter of receiving a note which said Wirths was "disrespecting" the neighborhood by having black children play outside her house.

This neighborhood does not need any blacks in it. There is a reason for the saying, 'The other side of the tracks.' That is where these people belong. You have done a great disrespect in this neighborhood by not thinking of your neighbors.

Wirths, who runs a daycare, told The Washington Post six of her nine grandchildren are black, and she is now a "little wary" of them playing outside without her supervision.

And even though Wirths doesn't know who the letter was from -- it bore no name and was addressed to "residents" -- the message was still strong enough to shake her up.

I'm reading it and I'm like, really? Then I reread it, and I just kept getting madder and madder. I was like, 'Why are you picking on my grandkids?'

The Washington Post says Wichita police are now looking into the incident, with a spokesman telling the paper cops are "actively investigating the legitimacy."

In the meantime, Wirths has to live on while wondering who exactly means ill toward her children and, perhaps most importantly, why they do.

I didn't know that Wichita was divided like that — that 'black people need to live on 'the other side of the tracks.' Where is that exactly?

The answer to Wirths' question is anyone's guess, but it seems clear at least one of her neighbors wants her grandchildren to go "back" there.