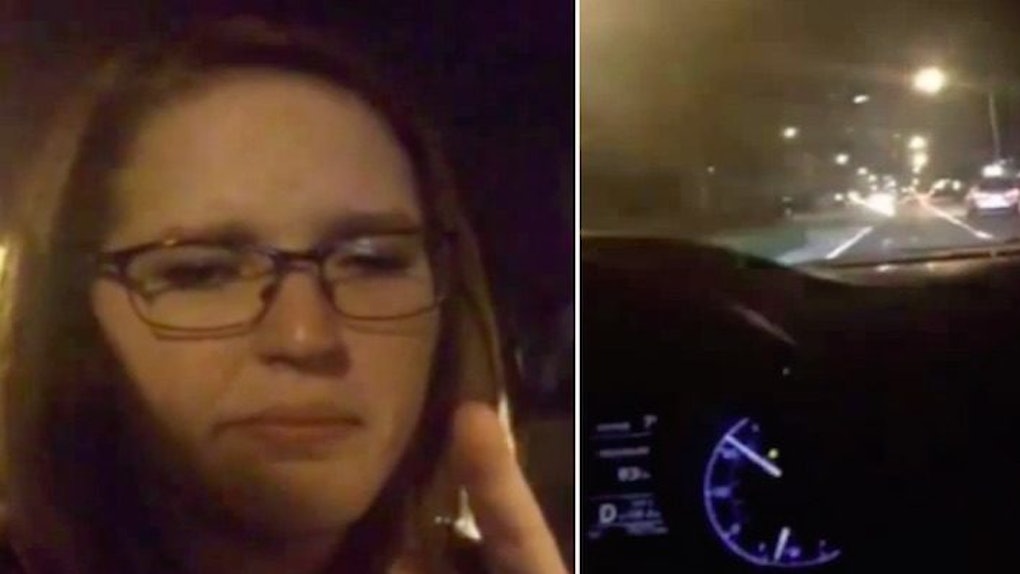 A Florida woman was arrested for DUI after she broadcasted herself driving drunk via social media app Periscope.

Saturday night, Periscope users were greeted with a video from 23-year-old Whitney Marie Beall labeled "Driving home drunk," according to The Smoking Gun.

The new app, owned by Twitter, allows one to stream live recordings to massive amounts of users, so Beall's 25-minute broadcast was viewed by dozens of horrified strangers.

Before beginning her journey through Lakeland, just outside of Tampa, Florida, Beall announced,

Some of the more frightening comments Beall then proceeded to make included, "I wish I could read," "I am a thick, white person" and, most frequently, variations of, "I am drunk."

Beall reportedly got a flat tire when she hit a traffic sign, presumably at the 11:40 mark in the first half of her broadcast.

Several Periscope users sent Beall messages telling her to stop her car, but after reading a few comments at a red light, Beall declared,

I'm not gonna listen to a single f*cking thing you say.

Sometime after the broadcast began, the Lakeland Police Department said it began to receive calls from viewers who described "a possible drunk driver using the social media [app] Periscope to broadcast herself."

The officers, however, weren't quite sure what that meant.

[Our officers were] like, 'What's periscope?' Luckily, one of our younger officers was able to figure it out.

That younger officer downloaded Periscope on his or her phone, allowing police to locate Beall about 20 minutes later by using landmarks in the video.

Beall was still so drunk when police pulled her over, she didn't immediately brake after hitting a curb. She refused to take a breathalyzer test but reportedly failed numerous sobriety tests.

Beall was charged with DUI, taken to jail and released on bond shortly after.

Beall told WFLA on Monday she understood her wrongdoing, but her attorney said she intends to plead not guilty to the charges on her behalf.

Here's the first half of Beall's broadcast.

The second half reportedly ends not long before the arrest.