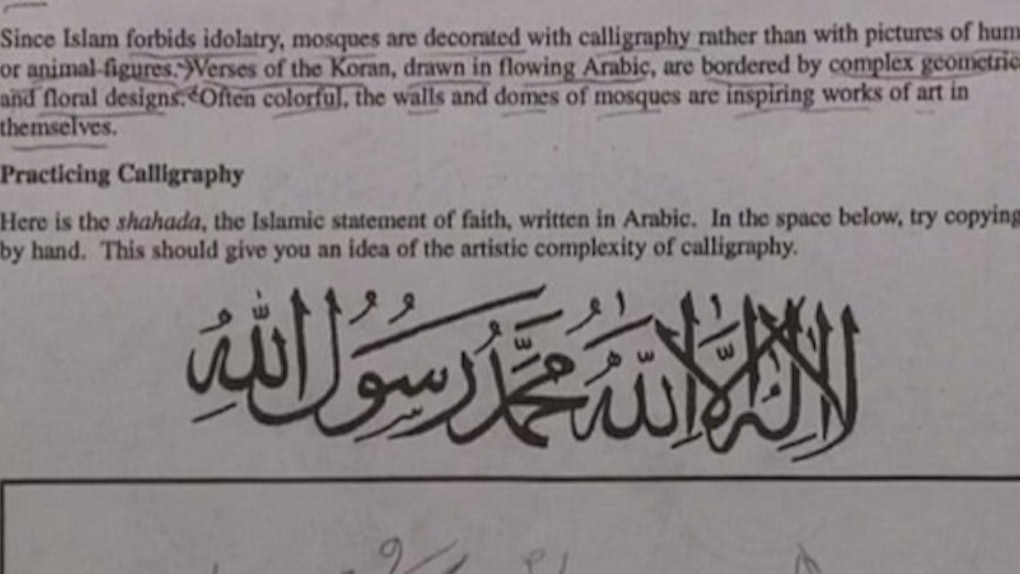 Some VA Schools Closed Because Students Were Assigned Homework On Islam

Students in Augusta County, Virginia were given a surprise day off from school on Friday after officials received "voluminous phone calls" objecting to a district-wide homework assignment.

As part of the district's world religion curriculum, students at Riverheads High School in Staunton were asked to copy Islamic religious calligraphy. District officials say the backlash from parents and the community began almost immediately.

Here is the shahada, the Islamic statement of faith, written in Arabic. In the space below, try copying it by hand. This should give you an idea of the artistic complexity of calligraphy.

The classical Arabic phrase given to the students translates to:

There is no god but Allah, and Mohammed is the messenger of Allah.

Following the media frenzy around the assignment, the district released a statement saying in part,

No lesson was designed to promote a religious viewpoint or change any student's religious belief. Although students will continue to learn about world religions as required ... a different, non-religious sample of Arabic calligraphy will be used in the future.

After receiving what the district believed to be credible threats, the administration decided to close all schools for the day. The school has also added armed security out of an abundance of caution.

While many members of the community took to social media to bash both the school and the particular teacher who assigned the work, Mrs. Laporte, there were plenty of parents who still support the given assignment. One Facebook group, "Support Laporte," has already gained more than 2,000 followers.

Citations: All schools shut down in Augusta County, Virginia, over Islam homework (CNN)