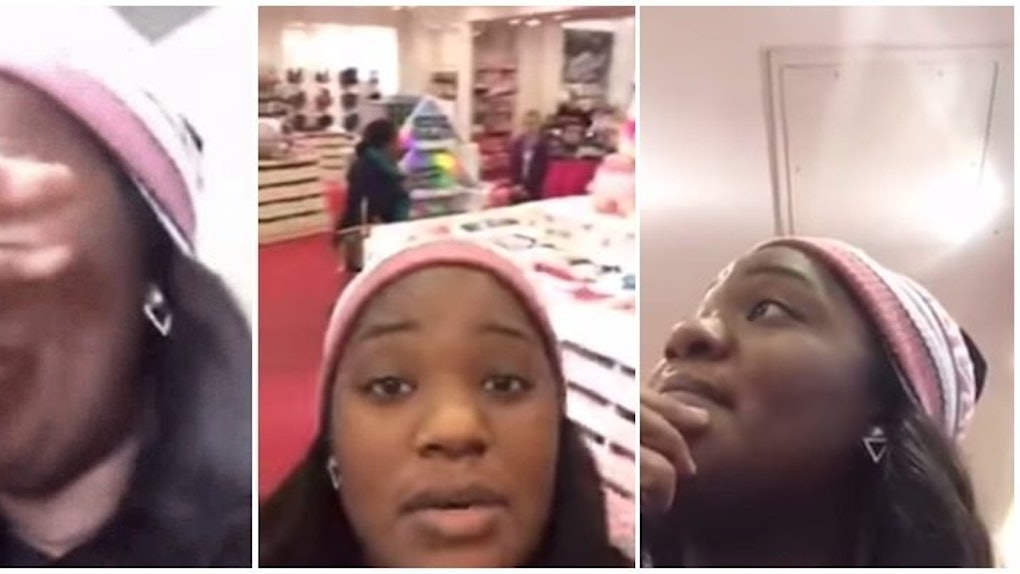 Kimberly Houzah, 27, is a nurse from Alabama and her Facebook live video from a Victoria's Secret in Quintard Mall in Oxford, Alabama, just went viral.

She was shopping in the store when another black woman was allegedly accused of shoplifting. She says the store manager reacted to this by kicking out every black person from the store. The manager called security to get them to leave.

Houzah broadcasted the encounter on social media, trying to make sense of it all.

You don't want to be that person who thinks everyone is racist, and I don't think everybody is racist. But we just happen to be three black people in Victoria's Secret and we got to be together. She's going to say you, you and you, get out. All y'all get out.

As Houzah tells it, the store manager didn't ask to check her bag and didn't even accuse her of personally stealing.

Houzah says she simply saw a black woman shoplifting, and reacted to that by kicking out all of the other black people in the store.

I would've felt more comfortable if she said 'mam can I check your bag' — if you would just try to make it look like it was some other way.

Throughout the video, Houzah tries to joke around and keep it relatively light, but she can't.

When faced with the stark reality of this shockingly straightforward display of total prejudice, she can't help but break down in tears.

What's so upsetting about this is it makes no sense at all. Like, even if you are a racist person, where is the prejudiced logic here?

Does she think all black people know each other? Or that when one black person steals something, all others in the vicinity feel the urge to do the same?

It just makes no sense whatsoever, even for a racist person — which is saying something.

To me, it seems as if the the manager is reacting purely with a sort of racism reflex. I can't imagine how brutal it must feel to have a person hate you that much, for no other reason than your race.

Houzah vows in the videos to never shop at the store again.

Victoria's Secret (eager, perhaps, to avoid Tweets that read "This whole time Victoria's Secret is that she's racist!") released a statement about the event, explaining the employee who kicked the women of color out is "no longer employed" at the store.

What happened at our store should not have happened and does not represent who we are or what we stand for. The store associate involved in this matter is no longer employed with the company. Victoria's Secret is adamant that all customers regardless of race be treated with dignity and respect at all times.

According to Birmingham News,  Houzah returned to the store on Thursday to have the store's employees apologize to her.

I'm an African American female and I just want to be treated like everybody else.

The simplicity of her plea, and how at odds it is with our culture, is tragic.