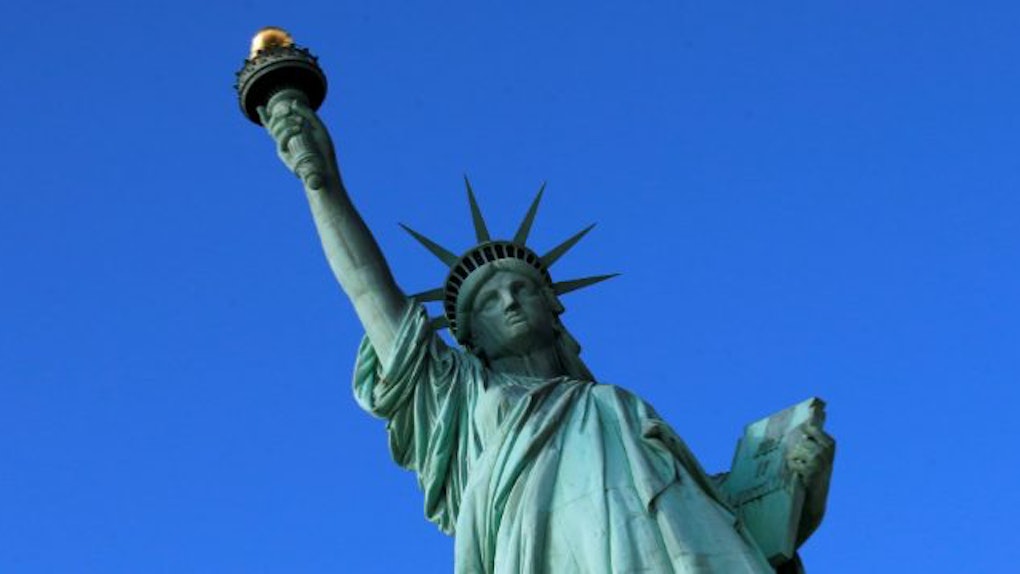 Trump Needs To Read Message On The Statue Of Liberty

America is a nation built by immigrants and should we ever forget that, we only need to look at the sonnet written on the Statue of Liberty by Emma Lazarus.

Give me your tired, your poor, Your huddled masses yearning to breathe free, The wretched refuse of your teeming shore. Send these, the homeless, tempest-tost to me, I lift my lamp beside the golden door!

But just to drive that message home, given President Donald Trump's recent immigrant ban, a group of activists hung a banner on Lady Liberty that read "refugees welcome."

A tweet was directed at Trump, who recently announced new immigration policies after his first executive order was suspended by the court system, that read,

The message of the Statue of Liberty is unmistakable. This banner ought to make it clear 2 @realDonaldTrump. #RefugeesWelcome #NoBanNoWall

The banner was hung up at 12:45 pm on Tuesday by an informal group. The small group of private citizens felt "like [they] needed to say something about the America [they] believe in."

A statement from the group read,

Speaking personally -- my grandparents met in a refugee camp after WWII, and my mother immigrated. So this touches close to home. But almost every American knows an immigrant or a refugee. We wanted to send a reminder about America when we're at our best -- the country that's a beacon of freedom to the world, built by immigrants. Walling off countries or entire religions is against our values.

A little over an hour later, park rangers took down the 3-by-20-foot sign that was held by nylon rope on the public observation deck at the top of the statue's pedestal.

One of the activists, who was identified only as David, said,

I think the Statue of Liberty is our best symbol of the role that immigrants have played and continue to play every day in this country. We left, and as we were taking the ferry home, [the banner] was still hanging. I would imagine that the National Park Service staffers who also make this country great who are working there — I would be surprised if anyone who cares about the history of the Statue of Liberty did not agree with what we were saying.

According the the New York Times, Trump plans to publicize crimes by immigrants, enlist police as enforcers, build new detention facilities, turn away asylum seekers, take away privacy rights of immigrants and speed up deportations.

Citations: The resistance spread this powerful message on the Statue of Liberty (Mashable)