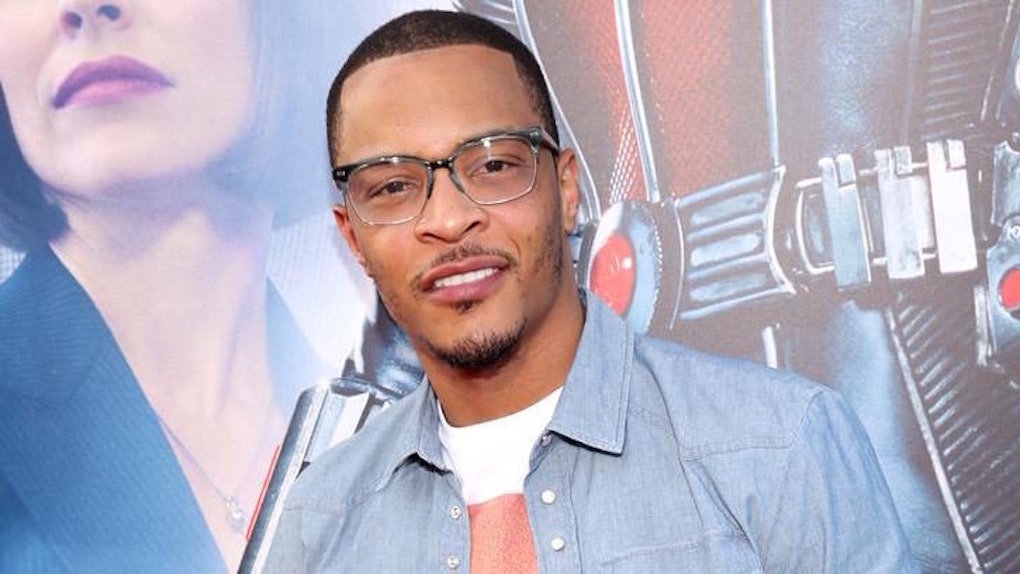 What TI's Misogynistic Views Say About Gender Inequality In America

This week has been filled with a firestorm of stories about sexism and gender inequality.

Jennifer Lawrence penned her experience getting paid less than her male costars in "American Hustle."

Chelsea Clinton was harassed at her own book signing by a conservative "journalist" (if we can even call him that), who inquired into her paternity and even accused her father, former president Bill Clinton, of sexually targeting teenage girls.

Planned Parenthood is still in constant danger, despite recent concessions to appease an increasingly tyrannical, male-dominated House of Representatives.

Women celebrated Ada Lovelace Day, but ultimately have to use hashtags like #ILookLikeAnEngineer to fight the gender stereotypes that run rampant in their professions.

Directly after the Democratic Debate, the male CNN reporter on stage asked Senator Sanders' wife, Jane, how she "felt her man did," because she is clearly nothing without her man, and can contribute nothing to the conversation except her womanly concerns.

A world famous astronomer got a mild (at-best) slap on his wrist for sexually harassing and physically touching multiple female students, and just this morning a man at Starbucks told me he wanted to suck my lips before I had even taken my first sip of coffee.

Yet, somehow, the cherry on top of this bullsh*t sundae of a week is rapper TI’s spectacularly awful interview, where he stated, “Not to be sexist, but I can't vote for the leader of the free world to be a woman."

He went on to say:

It’s kinda like, I just know that women make rash decisions emotionally -- they make very permanent, cemented decisions -- and then later, it’s kind of like it didn’t happen, or they didn’t mean for it to happen. And I sure would hate to just set off a nuke.

I will admit I wanted to make some rash and emotional decisions after reading this misogynistic interview, but by some miracle, I was able to get my uterus under control in order to write this article.

While it would be easier to brush off TI’s opinions as nonsense, his comments, along with the unceasing examples and stories of gender inequality in every industry, express a far more deeply-entrenched problem within our society.

In spite of the fact that women have scientifically discovered why we age, won multiple Nobel prizes and discovered radioactivity, nuclear fission and stem cells, they are still called "sugar t*ts" on the street.

Women are still put in compromising positions at work, and have to face the fact that they will never be able to walk home alone without anxiety.

California just passed the nation’s most comprehensive Equal Pay Act. While this is commendable, it is sad to realize this is only one state. There's 49 more to go.

TI’s opinions offer insight into something far more tragic than the thought process of an overly-opinionated rapper.

They allow us to see just how far a dick will get you in society, and how the lack of one makes you vulnerable to mischaracterization, spiteful attacks on performance and even physical abuse.

I am constantly told I only want to vote for Hillary Clinton because she is a woman, and therefore, my ability to analyze policy and politics is compromised by my focus on gender.

At the same time, men find it perfectly justifiable to not vote for her because she is a woman, and then are free to question her policies.

The double standard here is unbearable and unacceptable.

Hillary's performance in the debate once again proves why I will vote for her, and even though her fantastic reference to women taking longer to pee made me incredibly proud, that singular issue is not the only reason she gets my vote (and I'm sick of having to explain that).

TI, and men like him, feel perfectly entitled to make assumptions about women, and pay us less for those assumptions.

Only, women are growing less willing to put up with it.

Just like Jennifer Lawrence said, "I’m over trying to find the 'adorable' way to state my opinion and still be likable! F*ck that."

I would also like to point out to Mr. TI, and any others who may share his sexist views, that the only example of someone actually setting off a “nuke” in human history belongs entirely to the male gender.