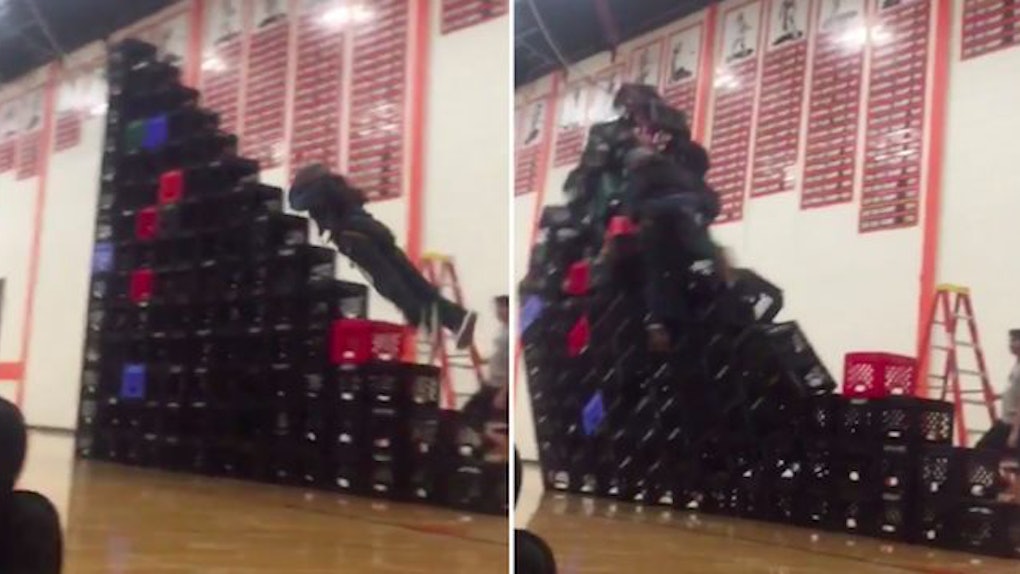 Imagine how much more stressful your life would be if someone had filmed every single one of your gym classes at school.

I mean, gym was home to some of the most embarrassing moments of my life, but I'm ok with that because other kids had some pretty spectacular fails too.

Anyways, apparently kids are filming each other in gym now, which is terrible news for Chicago high student Giselle Blancas, Mashable reported.

Apparently, Giselle's gym teacher built a colossal staircase out of milk crates and asked students to climb it, while attached to a harness.

But it backfired in style for Giselle, who transformed into a human torpedo, slamming helmet-first into the tower and sending crates flying everywhere.

I've watched that moment where she flies into the crates over and over again, and I can confirm it never gets old.

Seriously, scroll up and watch it again because you haven't watched it enough times. YOU CAN NEVER WATCH IT ENOUGH TIMES.

Moments before Giselle starts, a teacher tells her “don't stop,” and things seem to start ok.

But things quickly go south when this happens:

This isn't how it was supposed to go.

It left Giselle dangling helplessly in the air.

Before she made a graceful landing on the carnage she created.

It seems like she's ok, fortunately, although a classmate hilariously sums up what happened in the clip by saying “oh, she's dead.”

Let's also talk about the girl who just sits there casually with her feet up while all this goes down. What's up with that?

The clip was shared on Twitter, and people absolutely loved it.

I have so many questions about this.

How long did it take to set up all those crates?

Why is the girl filming it so chill while all this is going on in front of her?

And most importantly, why the hell wasn't my gym class this fun?!