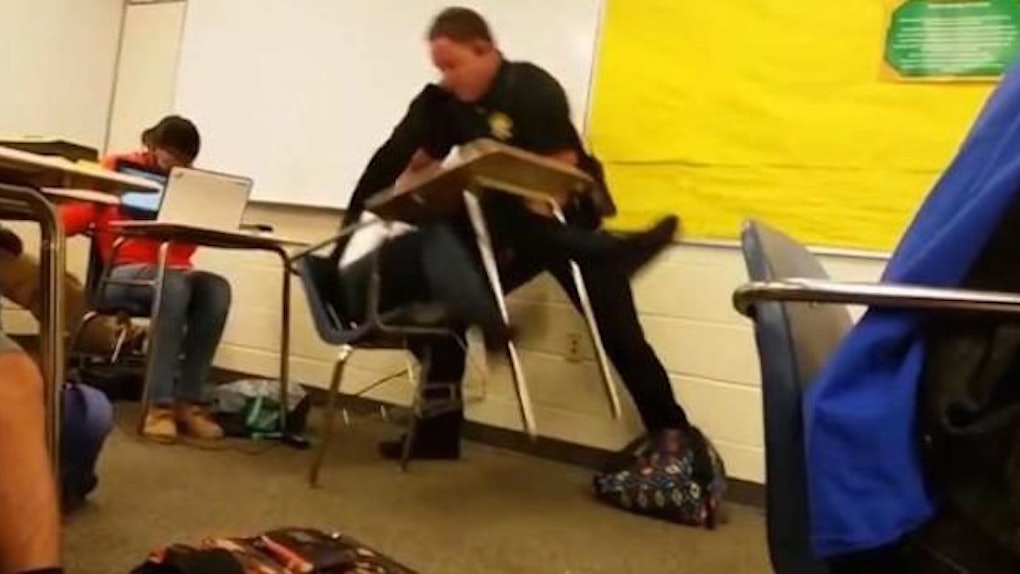 Students at Spring Valley High School walked out of class earlier today in support of the police officer who violently arrested a student last week.

Richland County sheriff's deputy and school resource officer Ben Fields was fired on Wednesday after an investigation found he did not follow protocol when he manhandled a female student who refused to leave her classroom.

The student was charged with "disturbing schools" and allegedly sustained unspecified injuries to her neck, back and arm.

She is said to have ignored a teacher's demand to stop using her cellphone and refused an order from an administrator to leave before Fields was called in.

In a shocking act of defiance, hundreds of students at the South Carolina high school staged a walkout at around 10 am today, according to WCSC-TV.

Some wore shirts demanding the 34-year-old officer be reinstated.

Students also reportedly chanted "Free Fields" while congregating in the school's atrium. It wasn't long, however, before an administrator confronted the protesters.

When asked about the walkout by WCSC-TV, the district referred to it as "small" and "orderly."

Richland County Sheriff Leon Lott told reporters on Wednesday Fields regrets his actions, but a statement from the officer's attorney said he exhibited the correct response to the student's behavior.

We believe that Mr. Fields' actions were justified and lawful throughout the circumstances of which he was confronted during this incident.

The FBI and Justice Department are currently investigating Fields' actions to determine whether or not he will face criminal charges and if he did or did not violate the student's civil rights.