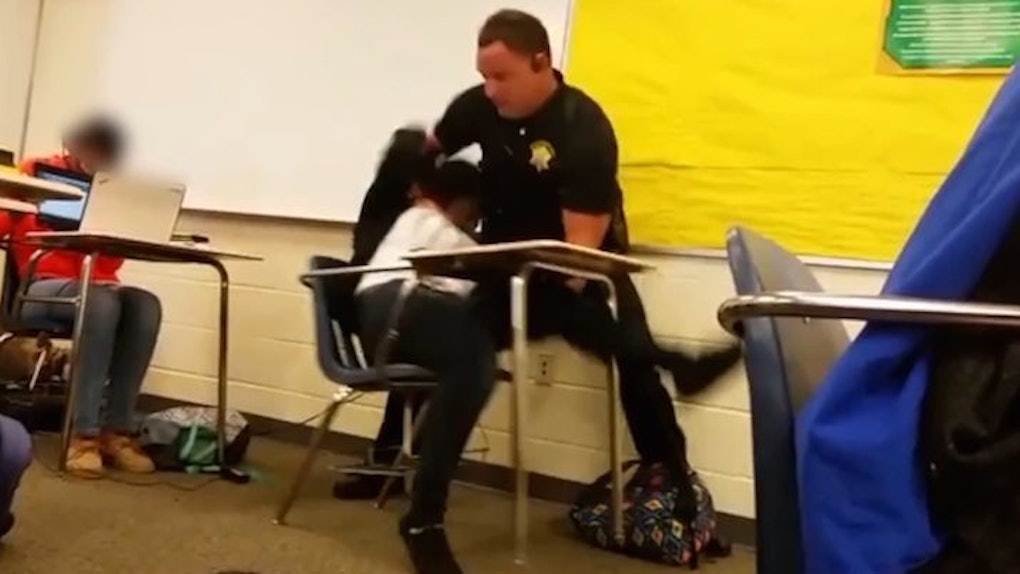 The South Carolina deputy sheriff who manhandled a female student in class on Monday was fired.

The female student was reportedly told by her algebra teacher to leave class because she was using her cell phone.

When she did not listen, an administrator was called in, but the student still would not budge.

Fields then arrived and told the student to get up or he would force her to. Her refusal to comply prompted Fields to violently flip over her chair and throw her across the floor before applying handcuffs.

Lott said the student's injuries amounted to a mere rug burn, but the student's attorney told "Good Morning America" the student suffered unspecified injuries to her neck and back and now has a cast on her arm.

The student and a female classmate who spoke out against Fields' actions during the incident were arrested and charged with disturbing schools.

Both were released to their parents soon after.

The other student, 18-year-old Niya Kenny told NBC News she spoke up when she saw Fields put his arm around the student's neck.

Fields was suspended without pay shortly after video of the arrest emerged, and investigations were launched by the school district and the sheriff's department.

Lott told reporters Fields' use of force was "not acceptable," according to NBC News.

He said in a press conference,

Lott added Fields never had a complaint filed against him in his seven years at Spring Valley.

The officer reportedly told Lott he regrets his actions, and Lott said,

If [Fields] had to do it over again, he probably would have done it different.

Fields was accused of using excessive force at least twice before, as well as targeting based on race.

Investigations from the FBI and Justice Department are currently underway to decide whether or not Fields will face criminal charges and to determine if Fields violated the student's civil rights.