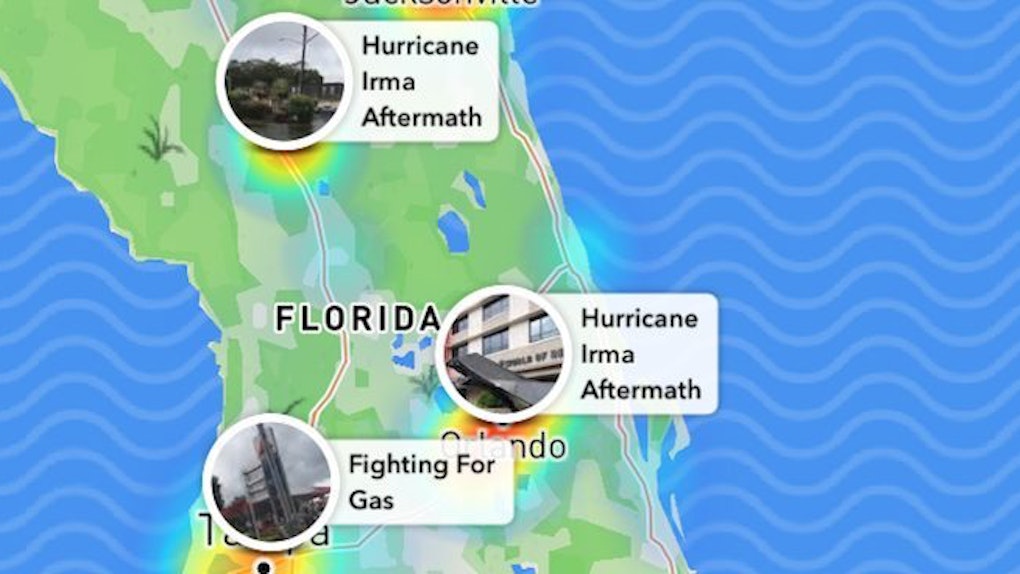 Before, during, and after Hurricane Irma crept through Florida, people had a unique way to peek into what was going on in the Sunshine State. Snapchat provided Hurricane Irma Snap Map stories that featured real-life clips of the people on the ground for the storm. While it was a totally new way to learn about a major news story, plenty of people helped to make it happen. In fact, within 24 hours on Sunday, Sept. 10, when the brunt of the storm made landfall, Snapchat received almost 250,000 submissions to the Irma news story from Florida, the company confirms to Elite Daily.

To show just how massive of a number that is, we can do some comparisons using Snapchat's data. 250,000 submissions in one day is about two and a half times more submissions than Snapchat got every day during Hurricane Harvey, which struck Texas the week before. And the numbers for Harvey were pretty startling too -- Snapchat was getting over 100,000 daily submissions for that storm's news story.

This is a massive increase from the submissions previous news stories had been getting on Snapchat. That increase could be due to any number of things -- for one, Hurricane Irma was on track to hit a gigantic swath of the state of Florida, which has a large population to start. Meanwhile, for me at least, Snap Map has been increasing interest in those location-specific stories. I know whenever there's a big story somewhere, I'll take a peek at Snap Map to see if they have an insider's look at what's going on.

Something like a natural disaster has a very real impact on very real lives. That's what makes Snapchat's news coverage even more insightful and just totally fascinating to me. Rather than seeing what a newscaster can get access to, Snapchat lets us see what's happening in people's homes, getting as real as possible. After all, Snapchat's strength has always been its reliance on reality, rather than Instagrammed glamor or perfectly contained tweets.

Meanwhile, the Hurricane Irma Snap Maps also had an impact on how news stations were covering the storm. NBC News, for one, reported on the footage coming in from Snapchat's news stories -- as well as that from Periscope and Facebook Live, where people were broadcasting what they saw in real time. According to NBC, people were using these platforms just to generally show what was happening and to spread messages about their personal safety to friends and family, and about the safety of certain locations for other locals who might be wondering.

Snapchat uses the news stories to show a vast variety of events going on all over the world. You can see them by getting to Snap Map -- open Snapchat and pinch the screen till the map shows up. Then you can move around the map, which looks like a heat map. Those more "heated" spots have snaps you can watch. You'll also see little circles over certain spots with labels -- those are stories.

On Tuesday, Sept. 12, for instance, you can check out everything from New York Fashion Week to a Hunting & Equestrian Exhibition in Abu Dhabi. At publication time, there is still a Hurricane Irma Snap Map story, this one up near Jacksonville in Florida. It shows flooded areas across the state and people dealing with power outages and inaccessible streets. You can even see Miami Beach Mayor Philip Levine showing users a downed tree to explain why the roads are still not safe for residents to explore.

Snapchat is making itself useful by providing an insight into major events that are far away from you. It's a pretty neat feature to have and gives us all a way to stay connected and be more informed.