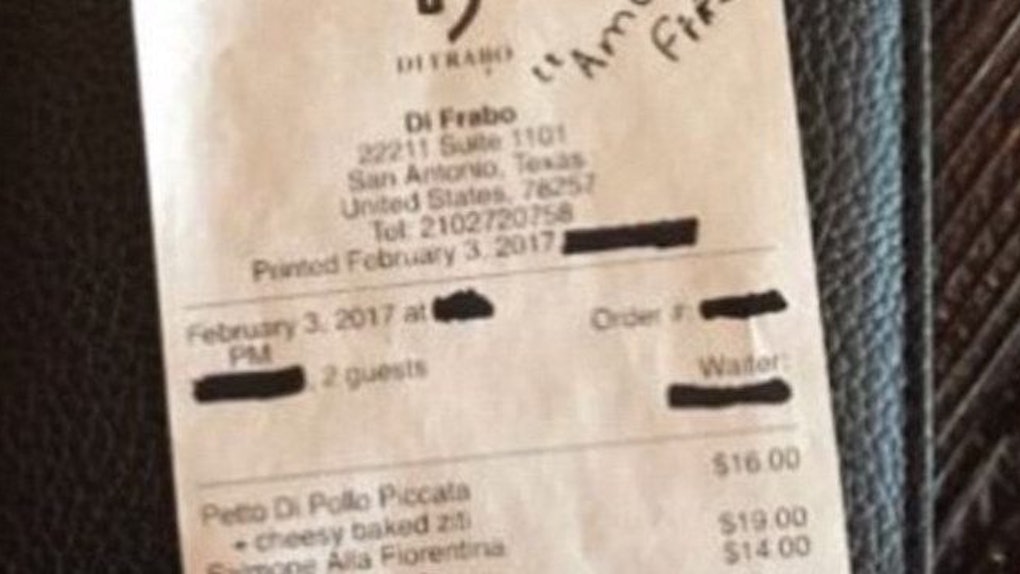 Some people's behavior will really make you lose your appetite.

After enjoying a wonderful meal at Di Frabo, an Italian restaurant located in a wealthy San Antonio neighborhood, customers left a note for the owner with a surprisingly racist ending.

On Friday, February 3, the customers left a note on their receipt praising the restaurant for its top-notch food and service.

Then, things took a turn when they said they would not return to the restaurant, simply because the owner of Di Frabo's is Mexican.

The food was tasty and the service was attentive. However, the owner is "Mexican." We will not return.

Then, these despicable people finished off the note with a popular slogan from Donald Trump's presidential campaign, writing, "America First" beneath the racist message.

As you can probably imagine, the owner of the restaurant, Fernando Franco, was quite shocked when he found the note left by his patrons.

In fact, Franco, who initially hails from Mexico City, said the racist remarks in the customers' cruel note was the first time he felt unwelcome in America.

News 4 reports Franco has no idea who left the mean message — since they paid in cash — or how the customers could have known he was the owner of the restaurant.

However, Franco noted he was speaking to his employees in Spanish at the same time the racist patrons were there.

After sharing the message on social media, the receipt has since gone viral.

Now lots of people are showing their support for the Mexican restaurant owner.

It's a feeling that you hear this every day in the news and you see what's going on. So at the end, you start feeling that it's affecting the people.

Despite the customers' cruel intentions, Franco said he would still welcome them back into his restaurant.