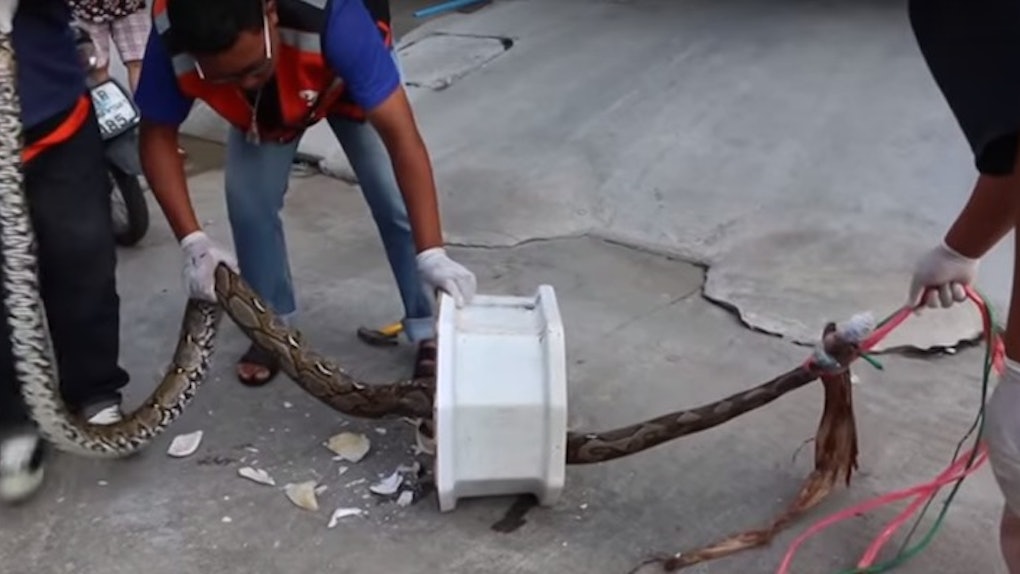 Just like everyone else on the goddamn planet, for a while in my life, I had a major phobia of some creature crawling up a toilet where I was taking a poop and biting my butthole and/or “front stuff.”

It's a crippling fear we've all had at one point or another, but it's never been more than that. It's always just been a fear. Aside from urban legends that kids tell on playgrounds about their cousin's cousin's best friend's brother, you never actually hear about a creature coming from the depths of a toilet to attack someone's genitals.

The fear of having this happen falls somewhere between monsters under your bed and psycho murderer clowns in your closet. It's scary, but it's never going to actually happen.

Until now. Now it's an actual fear you should have because some dude in Thailand had a snake bite his dick while he was on the can, and now I'll never NOT feel my dong isn't on the verge of being anaconda'd when I'm trying to live my life.

All 11 feet of this f*cking python bit this poor guy's peener, because God is dead.

After the python chomped down on 38-year-old Atthaporn Boonmakchuay's lil' Boonmakchuay, Atthaporn reportedly restrained the snake with a rope and then collapsed because of blood loss. He was rushed to a nearby hospital in Bangkok and is now recovering.

He is reportedly in stable condition.

Thoughts and prayers are with lil' Boonmakchuay.

Citations: 11 Foot Python Chomps Down on Dudes Penis While He Uses Toilet (Complex)