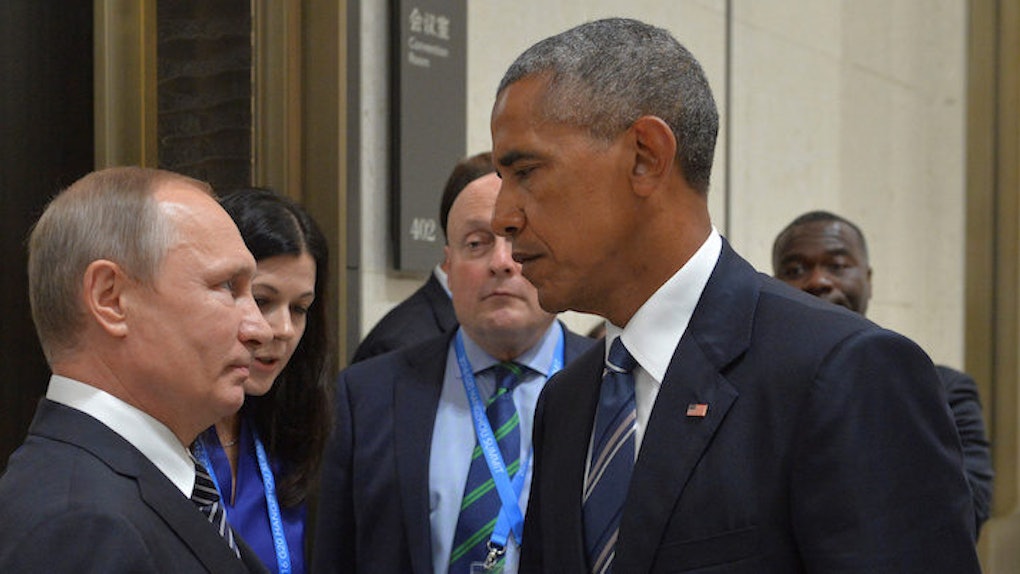 The relationship between the United States and Russia is currently looking a lot like it did in "Rocky IV."

If you're too young to remember that movie, it involved a sweaty American and a sweaty Russian (who is actually Swedish in real life, but whatever) beating the crap out of each other.

The movie was somewhat of a metaphor for the tense relationship between the US and the Soviet Union during the Cold War.

Between Russia's activities in Ukraine, allegations of tampering in the US election, an alliance with Syrian President Bashar al-Assad and Putin's cold relationship with President Obama, US-Russia relations have arguably hit their lowest point since the Cold War.

I think a new Cold War is clearly the reality.

According to a poll released on Friday, mistrust between the US and Russia has reached Cold War levels.

The poll showed just 23 percent of Russians have a positive view of the US, and a majority of Americans (55 percent) perceive US-Russia relations as "worsening."

Things are so bad between the US and Russia right now that Russian state television recently threatened the West with nuclear war.

To top it all off, American (NATO) and Russian personnel just held disaster-relief drills 150 miles apart in Europe.

It's kind of like a geopolitical dance-off, except it involves two nuclear powers exhibiting somewhat unsettling and aggressive behavior.

Given all this, there seem to be fears we're on our way to another world war.

A recent poll actually showed around half of Russians are afraid "heightened tensions in relations between Russia and the West could grow into World War III."

Needless to say, this is an unsettling prospect, so we decided to reach out to some foreign policy experts about how likely it is the increasingly tense relationship between Russia and the US will lead to WWIII.

Dr. Brandon Valeriano, a professor in International Relations at Cardiff University, acknowledged that things are great between the US and Russia right now but was not of the opinion there's a huge risk of another world war.

Mainly, he argued that Putin is trying to antagonize the West to distract Russians from their country's struggling economy, among other domestic issues.

While tensions have certainly increased in recent years, these are mainly due to Putin's own consolidation of power and declining economy. He is simply trying to distract the population by promoting general instability. The trick for the West will be to not overreact and escalate the situation.

Well, the Russian government has been making a lot of nuclear threats lately. But I think a new Cold War is clearly the reality -- complete with NATO basing troops in the Baltics to provide a tripwire and enhanced deterrence. The key in the old Cold War and hopefully in the new one is that the two sides work out rules so that mistakes don't happen, and minor ones don't become big ones.

In short, while the relationship between the US and Russia has definitely reached a very low point, it doesn't seem very likely we are heading toward World War II.

There's no denying there are some serious conflicts between these two countries, especially in terms of the nature of their respective involvement in the ongoing war in Syria.

But, for the most part, a lot of what's going on between the US and Russia at the moment is posturing.

As both Saideman and Valeriano noted, it's vital the US refrains from overreacting to aggressive behavior from Russia.

War between nuclear powers is not something anyone would benefit from. Fortunately, it's also very unlikely.