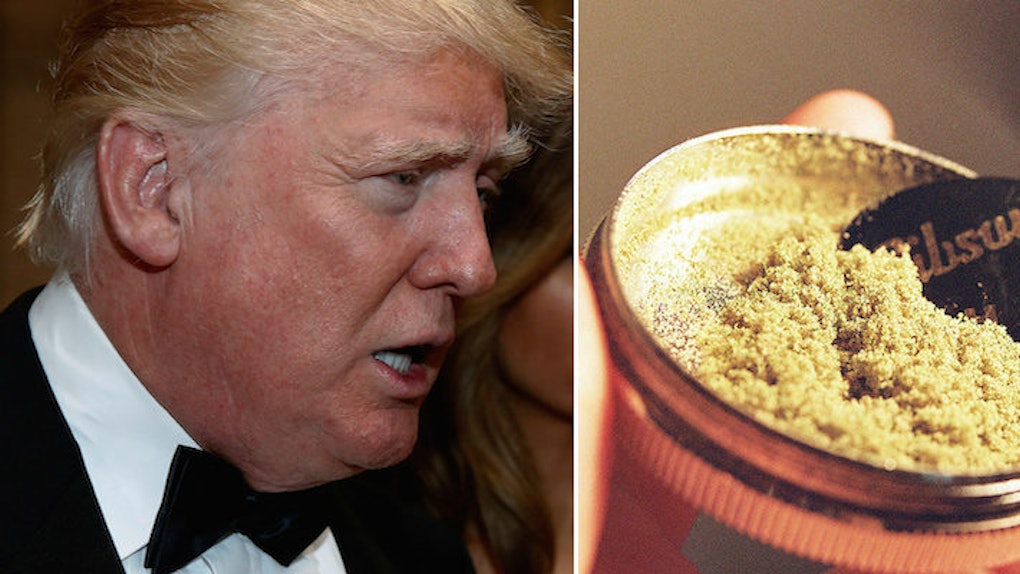 DCMJ Are Handing Out Weed On Trump's Inauguration Day

Marijuana reform group DCMJ is planning to give out 4,200 joints on the morning of Donald Trump's presidential inauguration.

The group is doing this as a form of protest. Their biggest concern is Trump's choice of attorney general pick, Jeff Sessions. They worry Sessions will roll back the progress made on weed rights.

Sessions has a history of being extremely racist and conservative. He opposes the legalization of weed.

DCMJ is handing out the 4,200 joints for free at Dupont Circle in Washington, DC before the inaugural proceedings begin, starting at 7 am. They will also give out coffee and tea.

They call their efforts #Trump420.

The possession of a small amount of marijuana is legal in DC, so 4,200 people holding one joint each isn't going to get anyone arrested. Weed is now legal in eight states, in addition to Washington, DC.

It is not, however, legal to smoke weed in public in DC. The group told ABC News they will not tell people to break the law by smoking in public... but they would not be opposed to that as a form of protest, either.

Adam Eidinger, the leader of DCMJ, said smoking in public on the day of Trump's inauguration would be "a great act of civil disobedience in light of the silence [on marijuana reform] coming from the Trump administration."

According to some reports, the police have bigger things to worry about than some people getting high on the day of Trump's inauguration.

Eidinger has offered to pay the fine, which is normally $25, for protesters arrested for smoking pot as part of #Trump420.

The group has people around the city rolling joints as we speak, to make sure they have 4,200 by January 20.

DCMJ has asked for volunteers to help make the protest happen. Volunteers can sign up to help with rolling, donating DC-grown cannabis, checking IDs and distributing joints on Inauguration Day.

As of Sunday night, they were up to 1,900 joints reportedly rolled.

DCMJ has said should Trump talk to them about his marijuana policy plans and Sessions, they would consider calling the protest off.