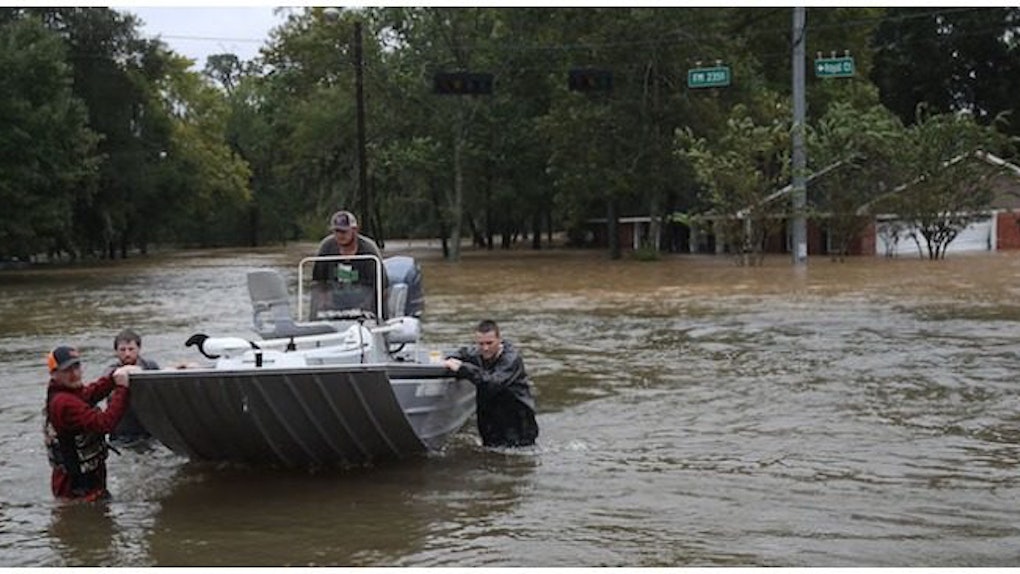 Video Of Hurricane Harvey Victim Lashing Out At Reporter Is So Upsetting: “People Are Really Breaking Down”

As people huddle in shelters and Harvey continues to pummel southeastern Texas with record-breaking rain, news outlets from around the country have flocked to the region to cover the storm. After all, it's a record-breaking deluge, the likes of which the United States has never before seen. But a video of a Hurricane Harvey victim's outburst highlights the pain and the frustration victims of Harvey are feeling -- and raises questions about the role of news media in covering stories as tragic and painful as this one.

A video of an unidentified woman displaced by Harvey went viral on Aug. 29 for her emotional response to a reporter's question. CNN was at one of the shelters housing people who had been displaced by the storm, asking victims to share their first-hand experiences.

The reporter in the video referred to "stories of mothers trying to save their children from the rushing waters," and asked the woman to tell her about her experience. Immediately after the reporter asked, the woman responded,

[I] walked through four feet of water to go get them food on the first day. Yeah, that's a lot of sh*t, but y'all sit here, y'all try to interview people during their worst times. That's not the smartest thing to do. Like, people are really breaking down here, and y'all are sitting here with cameras and microphones trying to ask us what the f*ck is wrong with us. And you really trying to understand with a microphone still in my face, with me shivering cold, with my kids wet, and you still putting a microphone in my face.

The woman was visibly upset: her voice cracked several times as she took the reporter to task for asking her, with her still-wet children in tow, how she was feeling.

In all fairness, the reporter apologized several times during the short interview. The network cut away as the woman walked away.

Hearing from eye-witnesses is a key element of successful news stories. Statistics, public records, and press releases can only do so much to make viewers and readers understand — real, personal stories are really what reach people and make them listen. But this particular interview raises questions about how far reporters should go to get first-hand accounts, and what they should cover.

It is essential that outlets such as CNN cover the historic flooding. After all, approximately 57 percent of Americans get their news from broadcast television, and 38 percent from online, according to a study by Pew Research Center. If news outlets weren't in Texas right now, many would only hear from President Donald Trump that everything is going pretty well.

But the interview also highlights an ethical quandary for reporters covering disasters and sensitive subject matter.

While coverage often helps fundraising efforts, and social media sites like Twitter have helped several individuals and families get rescued, is it really appropriate to go to a shelter and ask people who have just lost everything how they feel? This interview felt like witnessing someone unaffected by a tragedy taking advantage of a victim's vulnerability.

Perhaps it would be better to talk to someone who has had time to process, or someone who is out on a rescue boat. People who are decidedly less vulnerable, considering the situation.

The woman in the video is visibly shaken, and her anger is understandable. She has potentially lost everything, is trying to care for her children, stuck in wet clothes with hundreds of other people in the same situation. Her plea for compassion is something that news outlets can heed, while still giving those of us scattered around the country an idea of the dire situation.