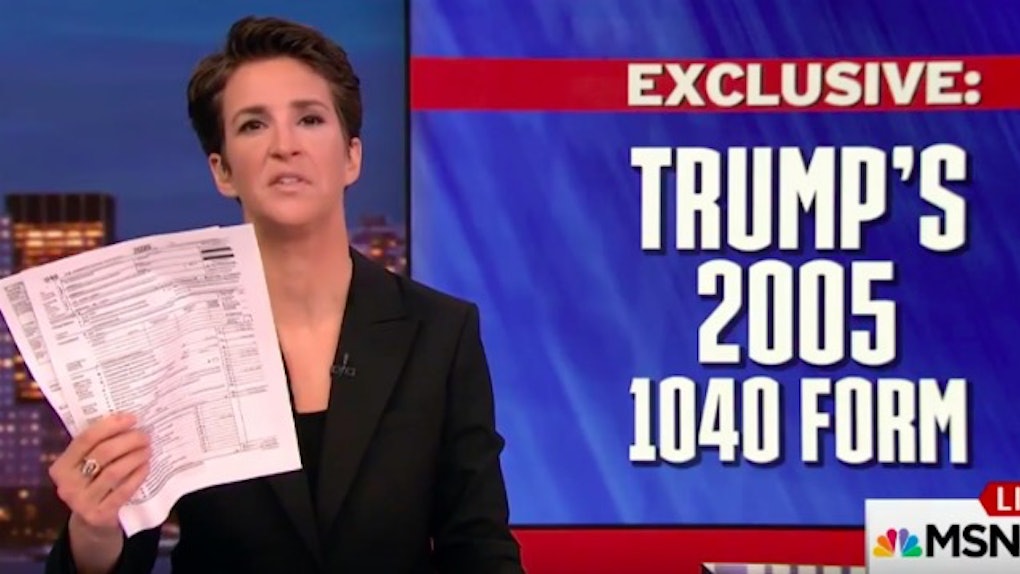 When Rachel Maddow tweeted out she had Trump's tax returns, I thought to myself, "My God, this is it. This is the final proof Russia has had unconstitutional dealings with Russia."

I also contemplated this was a red herring and she really had Barron Trump's tax returns. But I put that probability at 5 percent.

Unlike "Get Out," which was hyped up to me and totally lived up to that hype, Rachel's "discovery" was very, very underwhelming.

The opening of the show delved into the connections between Trump, the Russian oligarch Dmitry Rybolovlev who previously bought one of Trump's houses at twice the value, the Bank of Cyprus (co-owned by that same oligarch and noted for alleged money-laundering for the Russians) and Trump's current Secretary of Commerce Wilbur L. Ross (who also owned parts of the Banks of Cyprus).

While this all seems like the plot of "All The President's Men" meets "Mr. Robot," the tax returns did not follow that narrative. At. All.

After the intro, I thought there would be a huge bombshell found in the 2005 tax returns (his 1040 form) MSNBC had obtained through David Cay Johnston, a Pulitzer Prize-winning journalist who received the documents in his mailbox from an anonymous source.

It's like the end of the last season of "The Walking Dead" where we thought we'd get a chance to see whom Negan killed, but it faded to black leaving us all pissed AF.

After making $150 million in income in 2005, Trump paid $5.3 million in federal income tax in addition to $31 million in "alternative minimum tax."

The total amount of taxes he paid? Around $38 million. Or 25 percent of his income.

The deeper questions of whom Trump paid and with what amount, who paid or loaned Trump money, the interest Trump paid and what his financial ties to foreign countries are remain unanswered.

While Trump has blamed an IRS audit as the reason why he's withholding of his tax returns, the IRS said that justification isn't true. He can release those tax returns if he wants to.

However, as Rachel's program pointed out, Trump can't claim the taxes he files this year are under audit.

To be fair, there's one major thing we all learned: We're all very, very poor.

Trust me. That's the only shocking development from these two pages of tax documents.