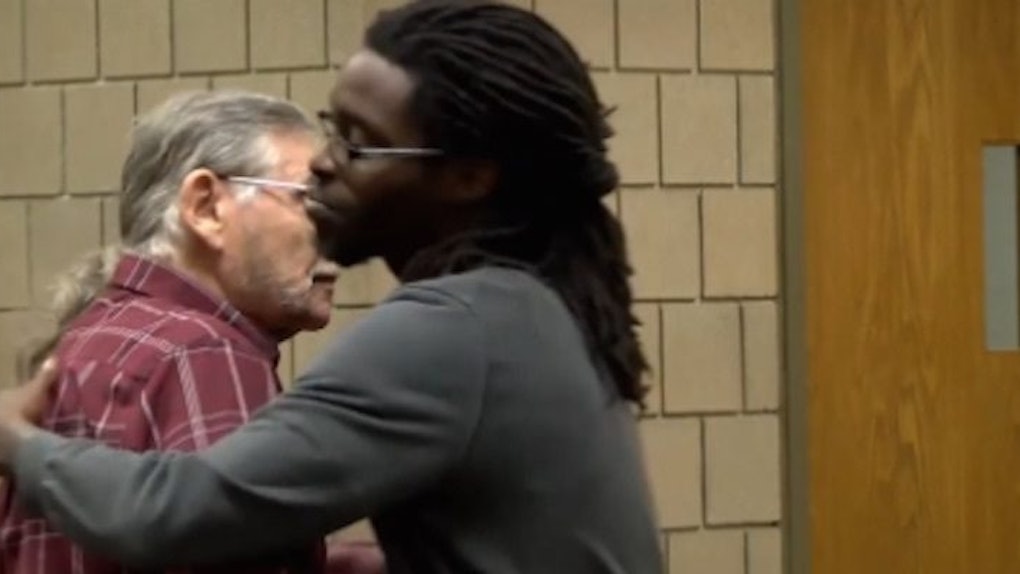 On Wednesday, a white Trump supporter apologized to a black protester he assaulted at a rally in Fayetteville, North Carolina back in March, CNN reports.

The man, James Franklin McGraw, was charged with assault after he sucker-punched Rakeem Jones in the face.

This incident was caught on video, and was widely shared.

After he struck Jones, McGraw was also recorded saying,

The next time we see him, we might have to kill him.

But it appears McGraw now sees the error of his ways.

At a court hearing on Wednesday, McGraw apologized to Jones and shook his hand. The two men then hugged, and the court room burst into applause.

You know what you did, and I know what I did. I'm not going to say you were wrong or I'm wrong. I hate it worse than anything in the world. If I met you in the street and the same thing occurred, I would have said, 'Go on home. One of us will get hurt.' That's what I would have said. But we are caught up in a political mess today, and you and me, we got to heal our country.

In response to all this, Jones said,

McGraw pleaded no contest to assault and disorderly conduct charges.

He was given a suspended 30-day jail sentence and a year on unsupervised probation.

Here's the video of the two men reconciling.

It's been an extremely divisive year in America. The US presidential campaign definitely contributed to this, which isn't exactly a secret.

The country still hasn't fully recovered from the election and tensions are still high for a wide array of reasons.

With that said, it's nice to see two people overcome their differences and exhibit a level of civility that's felt absent in the US over the course of 2016.

At the end of the day, no matter how much we disagree, we all have to find a way to co-exist in this country.

This doesn't mean we should normalize hatred, or stand idly by when certain groups or individuals are targeted or abused.

What McGraw did was wrong, plain and simple. The violence he exhibited should never be condoned.

Even though his remarks to Jones seemed to fall short of a full apology, McGraw seemed to recognize that in his own way.

Moreover, it was very admirable of Jones to step forward, shake his assaulter's hand and embrace him. Forgiveness can go a long way.

Yes, we should continue to stand against hate in all its forms. But, when appropriate, we should also find ways to reconcile.

In short, while it will likely be awhile before it's truly ready to, America could really benefit from hugging it out. McGraw and Jones are proof of that.