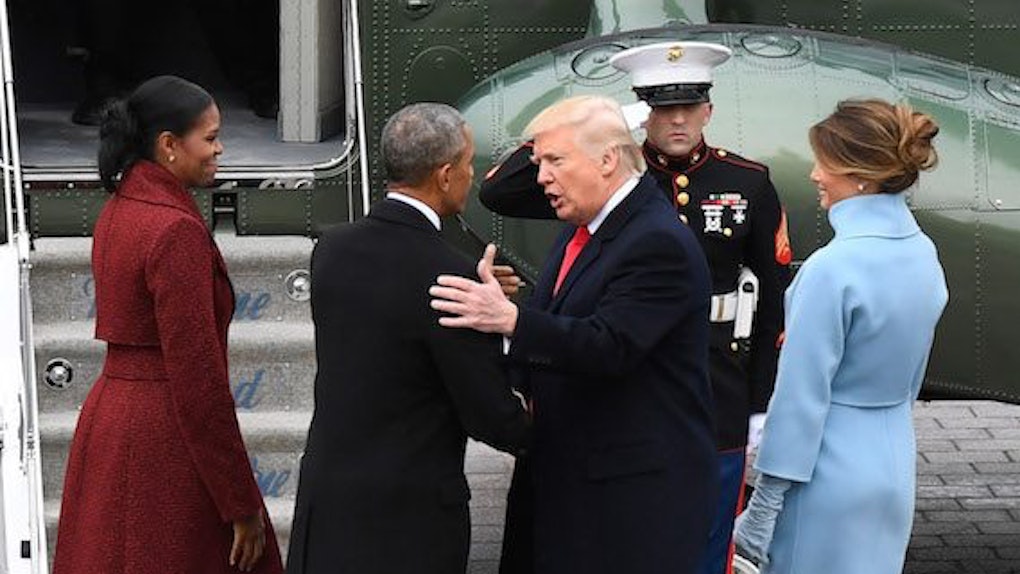 President Donald Trump showed off his collection of inauguration photos during an interview with ABC News partly to, once again, insist (falsely) he had a big crowd at his inauguration.

These photos are hanging in the White House.

But one eagle-eyed viewer noticed Trump may have been lying about the size of another thing.

Dana Schwartz, an arts writer for the Observer, was particularly interested in the photo Trump showed of him giving Barack Obama a goodbye as he got onto a plane to officially leave the presidency.

The photo hanging in the White House, according to ABC News, looks like this:

An official version of that photo, taken directly from Reuters, looks like this:

Schwartz believes that Trump had his hand photoshopped to appear bigger in the photo hanging at the White House.

It may not look like much when you seem them separately, but when you see them side-by-side, it does kind of look like there's a suspect difference.

It might be because of the quality of the ABC News clip, but Trump's hand appears as if it was stretched out using an image enhanced like Photoshop. The hand is less defined and seems proportionally larger.

See the difference again here in a gif provided by Zach Webb:

This is all conjecture, of course, and it's a difficult direct comparison to make.

Trump's hand does appear almost comically out out there in the original photo as its whiteness contrasts off Obama's black coat, so it's understandable that it stands out.

We also know Trump has long had a major insecurity over his hands, which many claim are small in proportion to his larger body.

We also know he's struggling with insecurity over his crowd size — and he demanded the acting director of the National Park Service get him photos that make his inauguration crowd look larger.

To this, Donald, we say to you what well-meaning folks say to adolescent boys everywhere: It is not the size that matters, but the character with which you carry it.