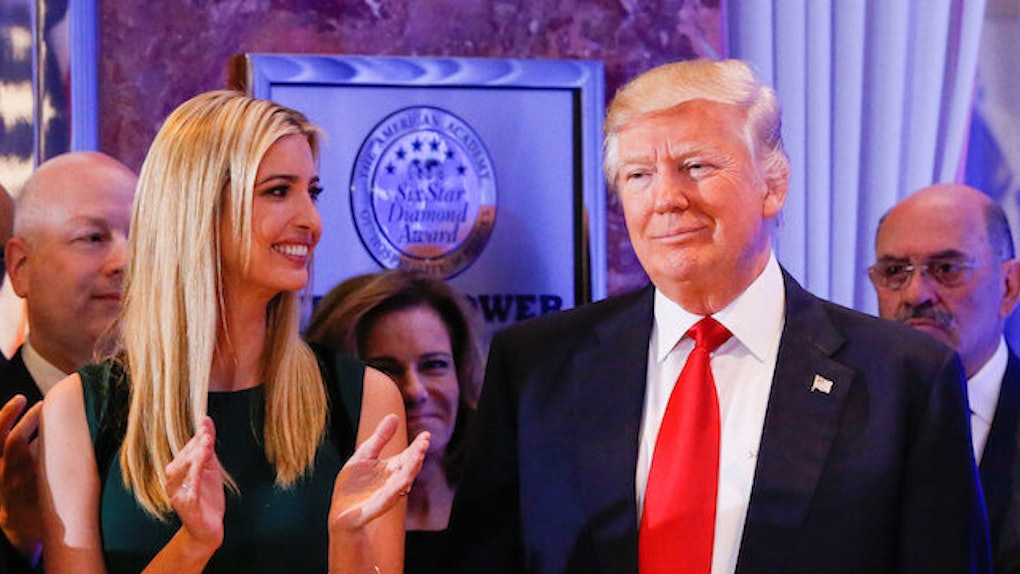 President-elect Donald Trump made yet another Twitter flub on Monday night.

No, it wasn't another typo or ignorant shit-talking of a Civil Rights hero or threat of nuclear war or PEOTUS-doth-protest-too-much exclamation that he did not hire prostitutes to pee on a bed.

This time around, Trump just tagged an Ivanka who is not the actual Ivanka Trump, his daughter.

Which, when you compare it to all his other Twitter offenses, isn't actually that bad.

The man who is about to become the leader of America was attempting to praise his daughter Ivanka, who he has previously said he would date were she not his daughter.

This was all prompted by a CNN "Special Report" on the not-quite-First-Lady-to-be. (Of course, Trump just last week called CNN "FAKE NEWS.")

Trump was trying to retweet a fan saying his daughter is "great."

(Side note: Trump doesn't know how to quote tweets. He always uses that outdated format of copy-and-pasting a person's tweet rather than simply retweeting or using Twitter's "quote tweet" option.)

But Trump failed to call Ivanka Trump "great, a woman with real character and class." Instead, he called Ivanka Majic those things.

And this particular Ivanka, a digital consultant from England, isn't Trump's biggest fan. She told CNN,

The interesting thing about my being dragged into a Twitter conversation with Trump is that my politics are very different than his.

Majic used the tweet as an opportunity to clap back at Trump. She tweeted:

Her tweet asked Trump to learn more about climate change, a topic which Trump has said he doesn't believe exists.

She included an infographic from Information is Beautiful, a data site:

According to this particular graphic, less than one percent of scientists don't believe climate change is related to human behavior.

Majic was proud of her use of the unexpected platform. She wrote on Facebook she was doing what she could.

To paraphrase Gandalf, no one wishes to live in a time of such tweets, but we all have to decide what to do with the tweets given to us.

Trump has yet to acknowledge his mistake. (#EvergreenTweet.)