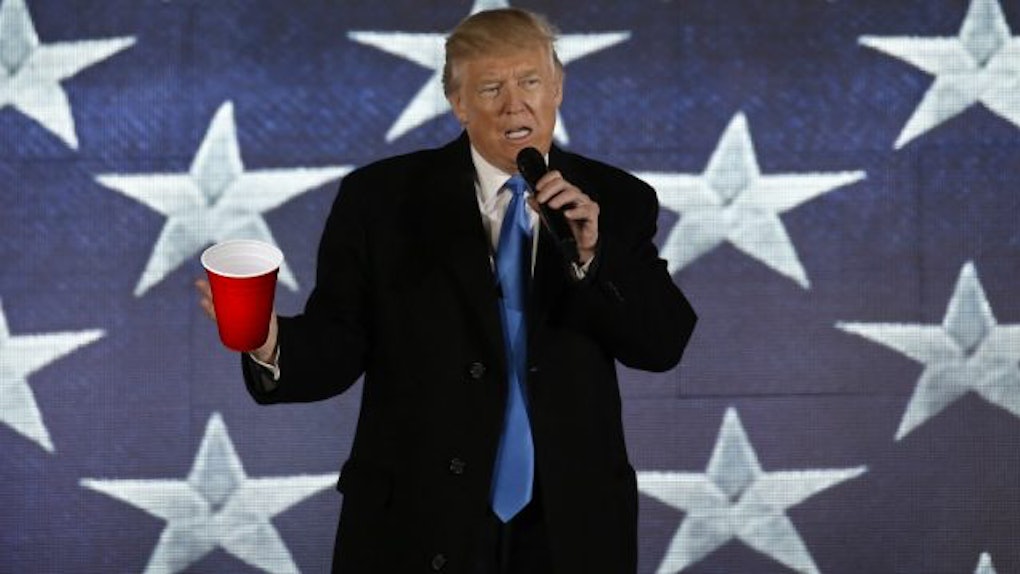 My Trump Inauguration Drinking Game Will Get You Drunk Fast

Let's face it, we're probably going to be blackout drunk over the next four years.

The inauguration of Donald Trump has already started out to be a disaster -- his inaugural concert live-stream's audio sounded like a haunted merry-go-round, and his lackluster crowds on Thursday were not the most diverse assembly of people.

Thankfully, I have a drinking game that will have you slurring your words by the time Trump finishes his inaugural address.

Of course, there's an app you can use for a drinking game that's based on polls, but my drinking game is for people who need to seriously imbibe their Inauguration Day away. Here are my rules, y'all.

*Although it shouldn't be an immunization shot because Trump expresses skepticism over vaccines.

2. When Trump takes the Oath of Office and says, "I do solemnly swear," solemnly swear with your favorite curse word at the TV, and take a sip of Vodka.*

*Take a swig of that Russian hooch because in 2001, Trump allegedly bragged about "banging Russians" to a gossip columnist. Na Zdorovie!

*Oh, did I say "Mai Tai?" I meant "My Tie," because despite Trump's slamming of China, his suits and ties are made there.

4. If Trump brings up replacing Obamacare, down a cheap beer brand.*

*With the planned repeal of Obamacare (the Senate already voted to begin its dismantling), if you are one of the roughly 500,000 people in this country who have a pre-existing conditions, you'll need to drink on a dime due to extremely high medical costs.

5. If Trump denies claims Russia was in contact with him, have a Golden Road Wolf Among Weeds IPA.

*Currently, Trump's associates who had worked to get him elected are currently under investigation by the very agencies Trump will now be in charge of. Drink Golden Road... because "golden showers."

I'm sorry, there legally had to be one "golden showers" joke in here.

6. If Trump brings up the future, have a Jalapeño Margarita.*

*I recommend a Jalapeño Margarita because Trump has called global warming "bullshit" and a "hoax," so you should probably get used to very hot liquids in the upcoming years.

7. If Trump brings up the wall between Mexico and the US, do a Jäger shot.*

*I say Jäger, because every time I have a shot of Jäger, I END UP PAYING FOR IT.

OK, go forth, and may your January 20 be the drunken fiasco it's destined to be.