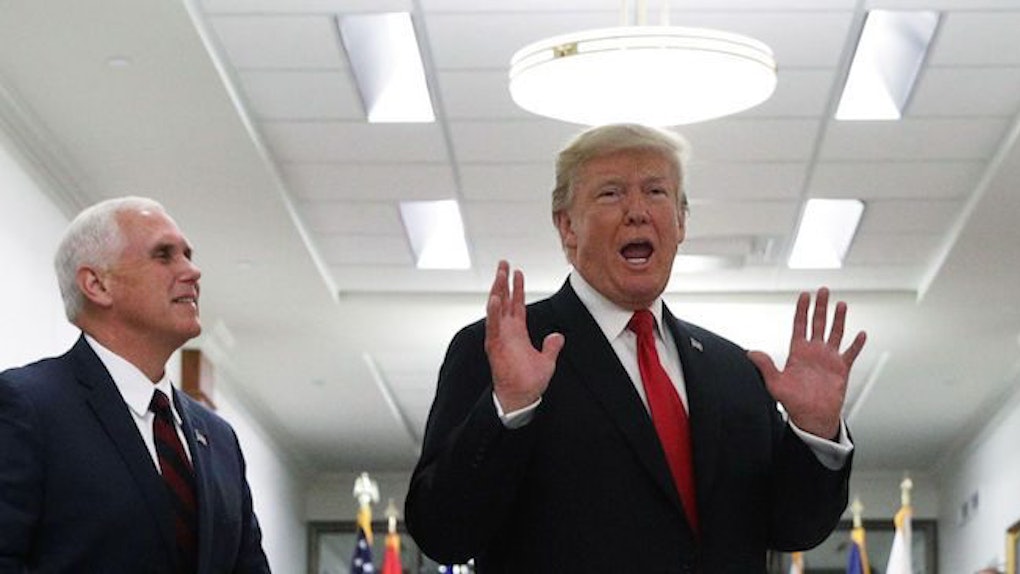 On Monday morning, Aug. 7, President Donald Trump performed his usual routine of firing off a serious of tweets attacking a variety of things and defending a host of others. But most concerning of these is Trump's effort to yet again draw attention to his campaign -- which ended nine months ago. And while Trump is busy defending the past, it appears that the GOP is preparing for the next presidential election, with or without him, according to the New York Times.

In three separate tweets Monday, Trump mentioned the "Trump base," a term that arguably separates the country into his those who voted for him and those who didn't. It is troubling that, on Aug. 7, more than halfway through his first year in office, the president continues to use language that sees his country as a body divided rather than united.

The president keeps talking about the 2016 election as though he still has to convince people it happened.

It's particularly bad timing that Trump is still so concerned with the past, given that his party is already looking well ahead to the future.

On Saturday, Aug. 5, Jonathan Martin and Alexander Burns of The New York Times reported about a possible "shadow campaign" forming in case Trump is not on the ticket for re-election in 2020. In this case, there are indications that members of the party are organizing to support candidates other than Trump. Among several potential candidates for the next presidential election, one of the names mentioned was current Vice President Mike Pence.

Mr. Ayers has signaled to multiple major Republican donors that Mr. Pence wants to be ready.

Pence has shot down the rumor that he was considering running in 2020, and White House counselor Kellyanne Conway says that Trump intends to run for a second term, according to the The Hill.

This is to say nothing of the 2018 election next year, which is already putting pressure on the GOP. According to two surveys conducted by FiveThirtyEight and SurveyMonkey, early indications suggest that the Democratic party might just get the edge it needs to take back the House in the 2018 midterm election. And while FiveThirtyEight reports that it's unlikely for the GOP to lose control of the Senate next year, losing even a couple of seats could force the party to moderate the kinds of legislation that get proposed.

The GOP already has suffered from a divisive nature and infighting (see: the failure of the Obamacare repeal and replace bills), and that's even with the benefit of controlling both sides of Congress. Should Democrats take control of just one of the houses in 2018 -- or even make substantial gains -- it could seriously impact Congress' ability to push through key parts of Trump's agenda and signature campaign promises.

The day after the Times' story, Trump didn't seem too concerned with future campaigning; instead, he tweeted his old campaign slogan, "Make America Great Again."

This is another of his routines: Citing statistics regarding economic performance and referencing his successes, no matter how many months pass or how irrelevant they become.

It's clear, though, that the rest of his party is done looking back. Whether or not Trump will run in 2020, the GOP seems to be moving forward.