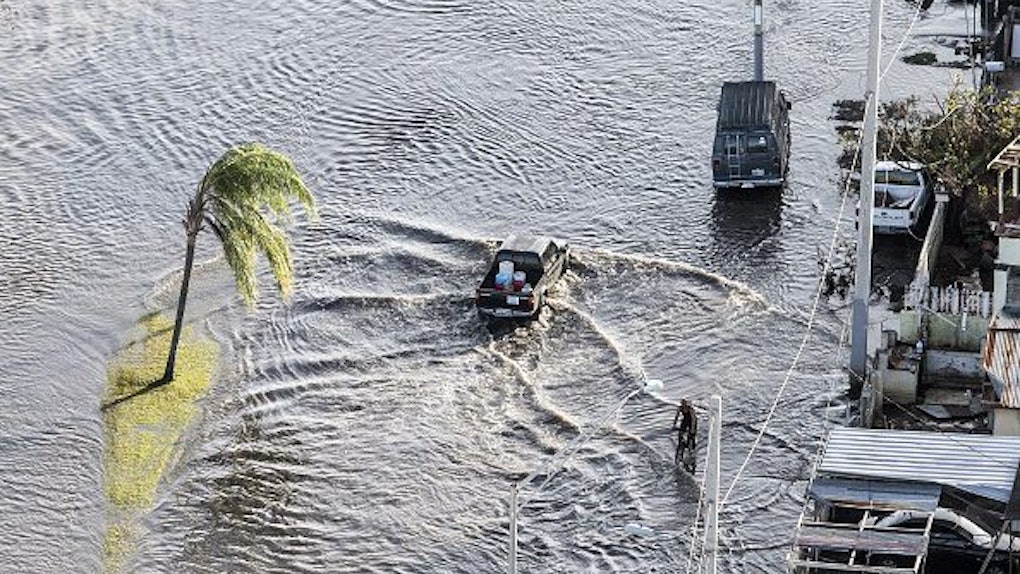 How Can Trump Help Puerto Rico After Hurricane Maria? Besides Going Off Twitter, He Has Options

President Donald Trump has had plenty of time to engage and fire back Twitter responses in the NFL debates, and he has received widespread criticism for his tremendous lack of response and aid for the Hurricane Maria victims. After days of inaction, it's fair to ask the question, how can President Trump help Puerto Rico after Hurricane Maria? On Tuesday, Sept. 25, House Speaker Paul Ryan called Hurricane Maria a "humanitarian crisis" in a press conference, saying that the people of Puerto Rico are "going to get our help. They're going to get the kind of support and the aid that Texas and Florida did." The question is, when?

The hurricane, which wreaked havoc on the island, hit Puerto Rico on Sept. 20. The island still remains without power and with limited drinking water, and things don't seem to be getting any better. On Thursday, Sept. 21, President Trump declared that a "major disaster" existed on the island, permitting the basic emergency aid through the Federal Emergency Management Agency, or FEMA. This gave FEMA the authorization to provide the minimal response and aid to one of the most catastrophic hurricanes the island has ever had. While the natural disaster can't be stopped by just him, here are some things that President Trump can do to help.

First, Trump can go to Congress.

The President can give Congress an official request, in the form of a long-term aid bill that will then give FEMA the authorization and money to amp up their resources. As of now, FEMA is aiding Puerto Rico with some of the $15 billion Congress has approved for all victims during hurricane season. If Congress were to pass a relief package of sorts for just Puerto Rico, FEMA could send more military resources to the island.

Congress is expecting Trump's official request for funding in mid-October, after the administration determines how much aid is needed, according to two sources that spoke to CNN. The request likely won't come before mid-October, since the President isn't planning to visit the island until next week, precisely two weeks after the hurricane struck.

He can also send the Navy.

If President Trump doesn't want to visit the island yet, he can at least send in the Navy. On Sunday, Sept. 24, former Democratic presidential candidate Hillary Clinton urged the president, along with Defense Secretary Jim Mattis, on Twitter to send in the Navy immediately. Just yesterday, Sept. 26, Navy Commander Mike Kafka, one of the spokesman, announced that the Navy ship will be leaving within the next four days and will take an additional five days to get to Puerto Rico. Why couldn't that decision have been made days ago?

Trump could work to waive the Jones Act.

Another possible way to help is if President Trump decides to waive shipping restrictions for Puerto Rico as part of the Jones Act. The Jones Act requires cargo shipments between U.S. ports to only happen on American-made and operated vessels. Officials from the Department of Homeland Security (DHS) said a decision is "unlikely" to happen yet, according to The Hill. A similar waiver was issued by the DHS for both Texas and Florida during the hurricanes on the U.S. mainland. So, waiving the Jones Act for Puerto Rico as well could help get gasoline and other supplies quicker to the island, critics say.

Many rescue and relief plans seem to be coming soon, but the longer we see inaction, the more public outrage will manifest. Decisions regarding the Jones Act and a long-term relief bill need to be made soon, because the situation in Puerto Rico is not helping itself.

“If you're one of the victims, every hour and every day is too long,” said James Lee Witt, who directed the Federal Emergency Management Agency under President Bill Clinton, to The Atlantic. “Over the next few days, you'll see a turn.”