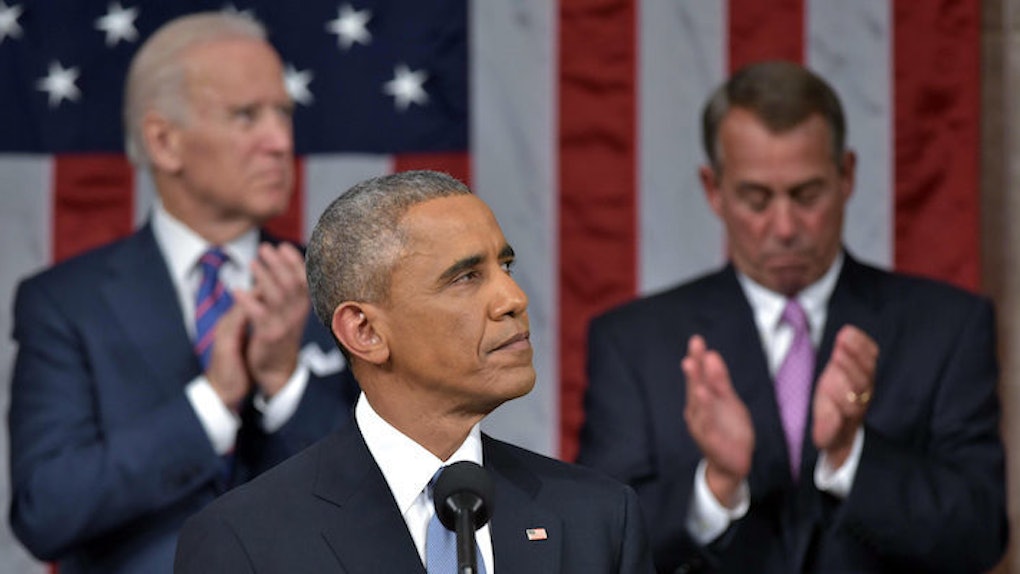 On Tuesday night, President Barack Obama delivered the final State of the Union address of his presidency.

The president's gift for oratory was on full display as he highlighted his administration's accomplishments and hopes for the future.

In many ways, it was standard operating procedure.

The State of the Union is a time for presidents to give themselves a pat on the back while outlining their agenda.

But it's also an opportunity for presidents to respond to criticism and touch on what is troubling them about the state of society.

Though President Obama never mentioned him directly, it's fair to say his speech was a profound rebuke of Republican presidential candidate Donald Trump's antagonistic, xenophobic, Islamophobic and fear-inducing rhetoric.

In other words, it was a giant "f*ck you" to Trump.

So while this State of the Union featured many elements of those in the past, it also went above and beyond what one might have expected.

We are living in one of the most divisive eras in recent memory. Republicans and Democrats despise one another, whether we're talking about members of Congress or the general public.

What we're currently experiencing could arguably be characterized as a bloodless civil war.

To Obama's credit, he expressed concern over this during his speech and in some ways took responsibility for it,

It’s one of the few regrets of my presidency – that the rancor and suspicion between the parties has gotten worse instead of better. There’s no doubt a president with the gifts of Lincoln or Roosevelt might have better bridged the divide, and I guarantee I’ll keep trying to be better so long as I hold this office.

Trump's campaign has gained momentum by feeding off people's fears and exacerbating their anxiety about immigrants, refugees and Muslims.

The incendiary real estate magnate has openly endorsed bigotry and intolerance on so many occasions it's becoming difficult to keep track of all of them.

This man supports mass deportations and banning all Muslim immigration to the US.

Some of his proposals surrounding Muslims are reminiscent of policies instituted by the Nazis to persecute Jews before and during the Holocaust.

His supporters have assaulted peaceful protestors at his rallies, sometimes with his support. Others have been involved in hate crimes.

But we should hardly be surprised as Trump began his campaign for the presidency by describing Mexican immigrants as "rapists" and "drug dealers."

All the while, he's been overtly critical of President Obama, describing him as a weak figure who's brought about the demise of a once great nation.

Has the president been perfect? Hardly, but he's accomplished a great deal amid one of the harshest political climates this country has ever seen.

He saved the economy when it was on the brink of irrevocable collapse, brought about tough reforms for Wall Street, fought hard to provide healthcare for millions of Americans with Obamacare, saw gay marriage legalized during his tenure, reestablished diplomatic ties with decades-old enemies of the US and has been the most progressive president on climate change in US history.

This is precisely why during the State of the Union address the president stated,

Anyone claiming that America's economy is in decline is peddling fiction.

And he rejected the notion the US needs to be made "great again," as Trump's campaign slogan suggests. He said,

America has been through big changes before. Each time, there have been those who told us to fear the future, who claimed we could slam the brakes on change, promising to restore past glory if we just got some group or idea that was threatening America under control.

The president also made it clear we can't allow the intolerant sentiments Trump condones to take root in our society:

We need to reject any politics that targets people because of race or religion. This isn’t a matter of political correctness. It’s a matter of understanding what makes us strong.

While Trump would have you believe ISIS is among the greatest dangers Americans currently face, Obama reminded the public these terrorists want us to be afraid.

And the president correctly asserted ISIS does not pose a significant existential threat to the US, nor does it represent the 1.6 billion Muslims around the world.

Masses of fighters on the back of pickup trucks and twisted souls plotting in apartments or garages pose an enormous danger to civilians and must be stopped. But they do not threaten our national existence. That’s the story ISIL wants to tell; that’s the kind of propaganda they use to recruit. We don’t need to build them up to show that we’re serious, nor do we need to push away vital allies in this fight by echoing the lie that ISIL is representative of one of the world’s largest religions. We just need to call them what they are – killers and fanatics who have to be rooted out, hunted down and destroyed.

The president was also careful to reiterate it was his administration that hunted down and eliminated the architect of the 9/11 terror attacks,

If you doubt America’s commitment – or mine – to see that justice is done, ask Osama bin Laden.

And he took a direct stance against Trump's proposed Muslim ban and unabashed Islamophobia,

When politicians insult Muslims, when a mosque is vandalized or a kid bullied, that doesn’t make us safer. That’s not telling it like it is. It’s just wrong. It diminishes us in the eyes of the world. It makes it harder to achieve our goals. And it betrays who we are as a country.

While the president perhaps embellished on certain points and didn't speak enough on others (or didn't mention them at all), his speech on Tuesday was perhaps the most powerful State of the Union address of his tenure.

The president used his words to paint a picture of the country he desires for the people he's led for the past seven years.

Clear-eyed. Big-hearted. Optimistic that unarmed truth and unconditional love will have the final word. That’s what makes me so hopeful about our future. Because of you. I believe in you.