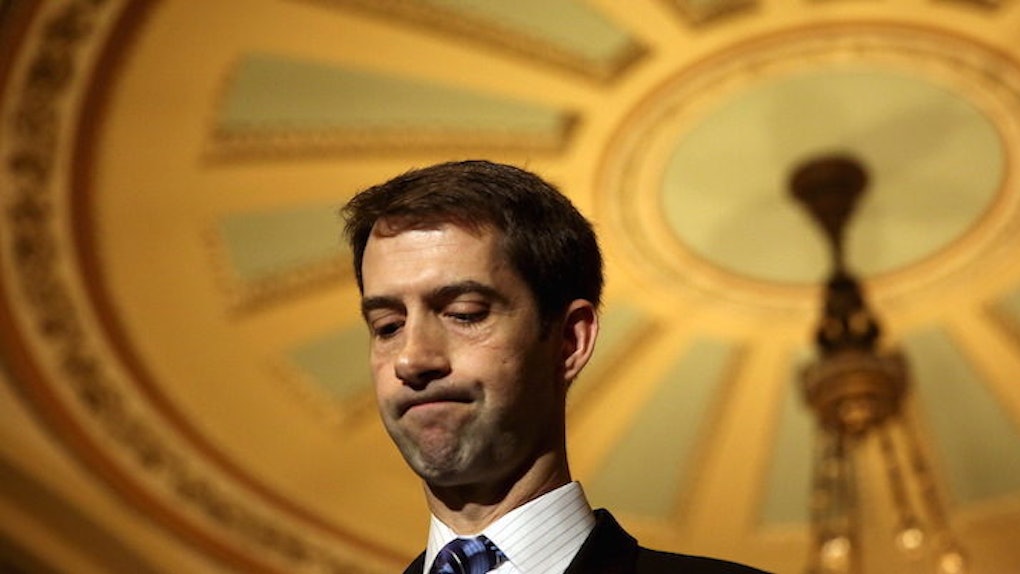 Republican Senator Tom Cotton just made some exceptionally misleading and arguably irresponsible remarks about incarceration in the United States.

His colleagues are currently working toward bringing needed criminal justice reforms, which he isn't too happy about. But his objection to these efforts is based off of a completely warped perception of incarceration in America.

Take a look at the facts. First, the claim that too many criminals are being jailed, that there is over-incarceration, ignores an unfortunate fact: for the vast majority of crimes, a perpetrator is never identified or arrested, let alone prosecuted, convicted, and jailed. Law enforcement is able to arrest or identify a likely perpetrator for only 19 percent of property crimes and 47 percent of violent crimes. If anything, we have an under-incarceration problem.

But there's just one thing; what Senator Cotton said is completely at odds with reality.

The US has the highest incarceration rate in the world. With just five percent of the global population, America possesses 25 percent of all the world's prisoners.

Much of this is connected to the war on drugs, and detrimental and prejudiced policies like mandatory minimum sentencing, which has led to the imprisonment of far too many nonviolent offenders.

Cotton wants to keep all of this around, however, and even argued against the notion we should "ban the box," or the idea that employers shouldn't ask people whether they've spent time in prison on applications.

Someone should probably inform Senator Cotton that recidivism rates in the US are extremely high largely due to the permanent stigma faced by ex-offenders.

When inmates are released from prison, instead of giving them opportunities, we often ostracize them. Consequently, with no one willing to give them a chance, these individuals once again find themselves resorting to crime in order to make ends meet. This is one of the driving factors of mass incarceration in America.

If we really want to drive down incarceration rates in the US, we need more than just legislative reform. Indeed, we need to completely change the way we view ex-offenders. Yes, they've committed crimes, but that doesn't mean they deserve to be stigmatized for life.

But Cotton stands completely against this empathetic approach, and he's not afraid to let us know. He stated,

As for the claim that we should have more empathy for criminals, I won't even try to conceal my contempt for the idea. I empathize first and foremost with the victims of crime and their families. We ought to give criminals a shot at rehabilitation and redemption, but primarily because it's in our interest as a society, not because they deserve more empathy... I will continue to oppose any effort to give leniency to dangerous felons who prey on our communities.

His viewpoints are not only callous, they're emblematic of why America's criminal justice system has ripped apart entire communities across the country.

The fact of the matter is, we live in a society in which a person's race and socioeconomic status presents them with a much higher chance of ending up in prison.

Nearly half of all US children have at least one parent with a criminal record, which has a detrimental impact on their well-being and significantly limits their opportunities.

For all of these reasons and more, it's long past time for us to take a more humane approach to criminal justice. As President Obama recently stated,

It just doesn't make sense to require a nonviolent drug offender to serve 20 years, or in some cases, life, in prison. An excessive punishment like that doesn't fit the crime. It's not serving taxpayers, and it's not making us safer. As a country, we have to make sure that those who take responsibility for their mistakes are able to transition back to their communities. It's the right thing to do.

Here are the facts, Senator Cotton, America leads the world in incarceration. We spend $80 billion a year to prop up our broken criminal justice system, which disproportionately impacts minorities and the poor. There are 2.3 million people incarcerated in America today.

These are not things we should be proud of, but elements of our society that desperately need to be corrected. You can't call yourself the "land of the free" when you're the world's top jailor.