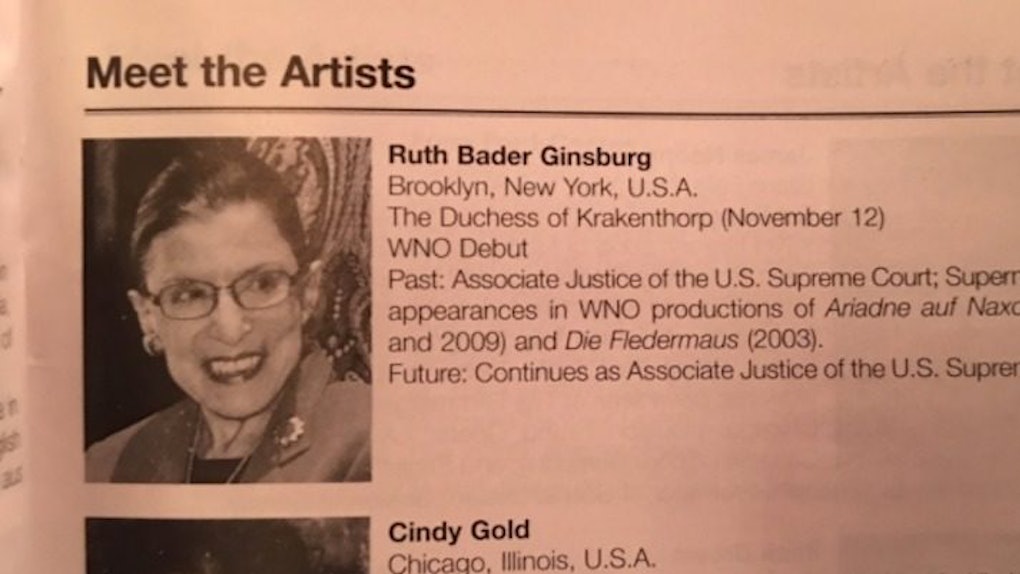 It was always going to be an exciting moment, but it was made even more emotional by the turnout of the election on Tuesday night.

With Donald Trump winning the election, people are worried for rights like that to abortion and birth control, same-sex marriage, affirmative action, protection for immigrants and of privacy and safety, all of which are upheld by the Supreme Court.

Trump has said he would appoint a justice who would basically take all that stuff away, and Ginsburg is now seen as one of the few remaining barriers from Trump having his way with American freedom.

The Notorious RBG was onstage at the Washington National Opera's opening night performance of "The Daughter of the Regiment" by Gaetano Donizetti. (WNO does this weird thing where they put opera names in English. Opera fans better know the opera as "Fille du Regiment.")

She performed in the non-singing role of the Duchess of Krakenthorp. "Fille" is a comedy and the duchess is a comedic role where whoever's playing it basically gets to make up the lines and say something silly — or meaningful. Ginsburg, who wrote her own lines along with Kelley Rourke at WNO, went for a mix of both.

The duchess tells the "daughter" of the title what requirements she has for a woman to be worthy of marrying her son. According to the Associated Press, Ginsburg's requirements included,

The best of the house of Krakenthorp have open but not empty minds. The best are willing to listen and learn. No surprise, then, that the most valorous Krakenthorpians have been women.

Applicants seeking a station so exalted must have the fortitude to undergo strict scrutiny. Their character must be beyond reproach.

She also apparently made a reference to Trump's racist birther movement, asking Marie for a birth certificate.

Philip Kennicott, a critic, wrote that Ginsburg's appearance caused a louder than usual applause. He wrote,

This came from some other place, a pent-up need to acclaim something good and resilient in the American democratic system; perhaps, also, a need to cheer for a woman who has risen to one of the highest positions in the land only a few days after the hopes of many that a woman might win the presidency were dashed by the election of Donald Trump.

Brownlee supports the Black Lives Matter movement and sang the national anthem at the Jets vs Ravens game last month. He said in a statement beforehand that he was torn about singing, as he respected Colin Kaepernick's protest, but ultimately decided to sing,

...with the conflicting emotions that pull at my heart…the honor, the pride, the frustration, the sadness…Colin Kaepernick's message, the hope of my ancestors, and the sacrifice of those who gave their lives protecting our flag.

This was not Ginsburg's first appearance onstage for an opera. She and Scalia have been "supers" — extras — at WNO before.

Ginsburg has been a longtime opera fanatic and has made several appearances in operatic settings. She has given speeches and talks about opera.

Ginsburg and Antonin Scalia, who died earlier this year, disagreed politically but agreed completely on a love for opera. In fact, composer Derrick Wang wrote an opera, "Scalia/Ginsburg," about just that.

Unfortunately, Ginsburg was only onstage for opening night. Her role is being performed by actress Cindy Gold for the rest of "Fille's" run at WNO.