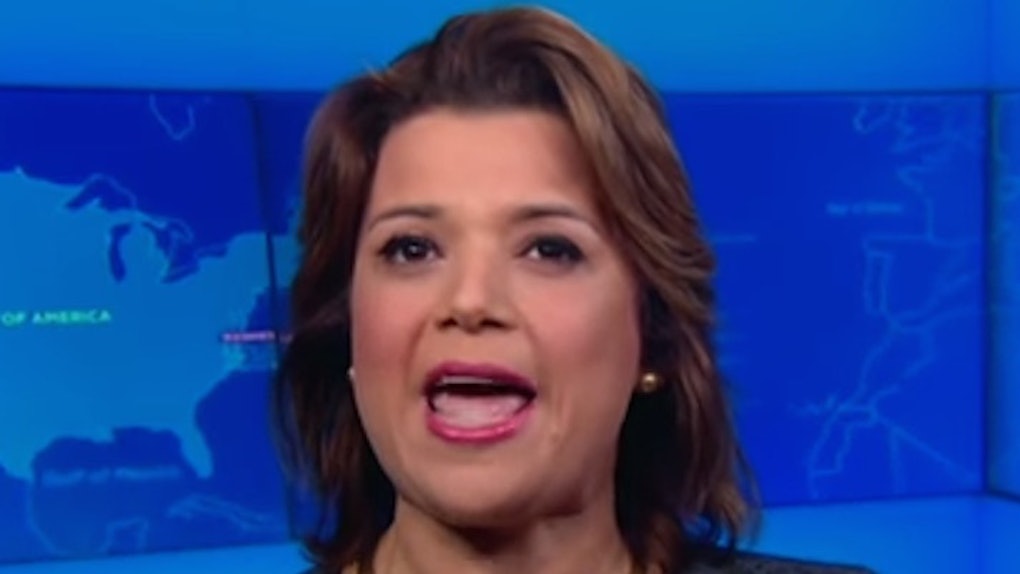 Ana Navarro Explains Why She Voted 'Against Trump'

Ana Navarro, a Republican strategist and commentator, has never made it a secret she's not a fan of Donald Trump.

She's frequently gone on CNN and ripped into the Republican presidential nominee and his surrogates, proving time and again she is not someone you want to mess with.

This does not mean, however, that she is a Hillary Clinton supporter.

But sometimes, when the circumstances in an election are so extreme and the fundamental principles of your country are at stake, you have to compromise.

Navarro just wrote a powerful op-ed in which she announced she voted for Hillary Clinton — in spite of the fact she's been a Republican her entire life.

I cast my vote against Donald Trump. I did it without joy or enthusiasm. I did it out of civic duty and love for our country.

She said she actually wanted to write-in her mother as a symbolic protest vote, but she ultimately decided against this, given the race is so close in her home state of Florida.

Navarro actually spoke about writing in her mother a few weeks back, but she's clearly changed her mind.

I had hoped that a week before the election, Trump would be losing Florida by a large enough margin that my vote wouldn't matter. But darn it, my home state is too close to call... I thought and I thought and I thought.... Then I cast my vote for Hillary Clinton. Let me rephrase that. I cast my vote against Donald Trump. I did it without joy or enthusiasm. I did it out of civic duty and love for our country.

Navarro decided to vote for her country over her party.

Her op-ed is a moving example of how difficult it can be to find a balance between following your principles and doing what is right for the country.

Navarro listed the many reasons she's not necessarily for Hillary Clinton but is definitely against Donald Trump.

Her list of reasons for voting against Trump (summarized below) is comprehensive and a strong rebuke of the real estate mogul, his campaign and rhetoric:

She really let him have it.

But Navarro also had some strong words for Clinton.

Navarro said she didn't want to vote for Clinton and, unlike Bernie Sanders, does care about her "damn emails."

I am disturbed by the blurry lines and for-profit overlap between Clinton's philanthropic, business and political worlds.

Clearly, this wasn't an easy choice for Navarro.

In spite of her many issues with Clinton, Navarro called on her conscience and did what she thought was best for America.

If you feel like this election has left you voting for the lesser of two evils, Navarro gets where you're coming from.

But she saw this as a choice between "bad judgment" and "bad character":

Like so many other Americans, I am left deciding which of these two candidates is the lesser of two evils, which one is capable of inflicting less damage on our country, our social fabric. The personal decision for me boiled down to choosing between a person who I consider to have very bad character and a person who has exercised bad judgment. Our founding fathers set up a government of checks and balances. We can and have survived presidents with bad judgment. But I fear the effects on America of a president with bad character.

In the end, Navarro felt this was about safeguarding America's democracy.

The conclusion of Navarro's eloquent op-ed is arguably the most convincing and inspiring part.

In Navarro's view, voting for Trump would be regressive:

I worry that Trump brings out the worst in America. Division. Hostility. Racism. Bigotry. Misogyny. Things we used to hide. Feelings we used to try to overcome.

Even if you don't agree with Navarro, you can't say she doesn't care about the future of America.