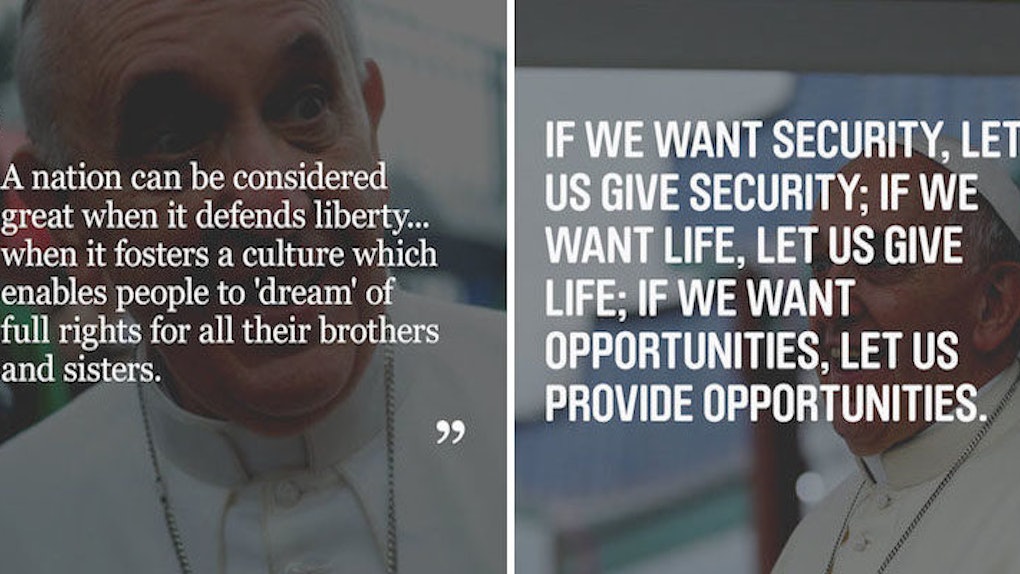 On Thursday morning, Pope Francis delivered an impassioned and comprehensive speech to Congress, covering a wide variety of topics.

The pope managed to find a healthy balance between praising the US for its short but storied history while also highlighting its many shortcomings -- both past and present.

He cited and celebrated the progress we've made as a species, simultaneously noting the scale and imminency of the myriad crises we face.

More than anything, the pope's message was one of solidarity, compassion and pragmatism.

But no one can put it better than the man himself. Here are 13 of the most significant quotes from the pope's historic speech to Congress:

The pope made it clear the polarized nature of American politics is derailing its progress, urging Congress to embrace compromise.

But he also praised America's inspirational spirit and the great strides it has made over the years, mentioning MLK Jr. and his beautiful "dream."

The pope also highlighted the importance of tolerance and empathy.

He issued a strong warning against the influence of money in politics.

In his view, politics must serve the needs of the many, not the interests of a few.

The pope sent a powerful reminder about how we should treat one another.

And he provided some important perspective on the ongoing issue of immigration in this country.

The pope also weighed in on the death penalty, and America's persistent unwillingness to abolish its use.

And he reminded us poverty is a complex problem that requires broad solutions.

He also made sure to emphasize the immense importance of addressing climate change.

And he explained why diplomacy is so vital for the world's well-being and future.

The pope urged America to practice what it preaches.

Finally, he reminded America it's at its best when it lives up to its own ideals: "We hold these truths to be self-evident, that all men [and women] are created equal."

Welcome to America, Pope Francis. We hope you enjoy your stay.