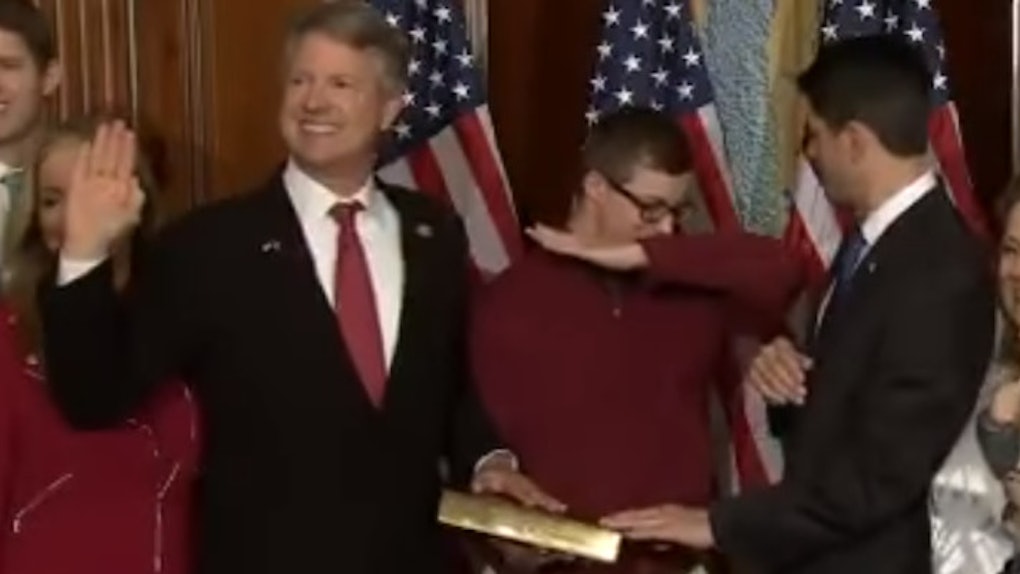 Shout out to my boy Cal Marshall for keeping the dab alive and well.

The son of Rep. Roger Marshall tried to switch things up during the official swearing in photo with the dance move.

And he would have gotten away with it too, if it wasn't for that meddling Paul Ryan.

The Speaker of the House went full dad mode and showed just how out of touch with teen culture he is when he asked if Cal was sneezing.

The cringey video sees Ryan turn to Cal -- who's holding the most fire dab of 2017 so far -- and stare at him, confused. Eventually, he asks, "Are you all right?"

Cal nods and holds his position strong. So strong. But Paul grows impatient.

Meanwhile, Roger is totally oblivious to the magic taking place behind him.

Do you want -- can you put your hand down?

He actually goes to move Cal's hand when the 17-year-old finally folds and says, "OK, OK, I'm sorry." Cal is laughing because he's my favorite person of this year so far. Ryan then asks,

Were you going to sneeze? Is that it?

To which Cal nods and says, "Yeah."

His father then confirms to photographers he is sneezing. The representative was unaware at the time, but since the video's gone viral, it's probably fair to say poor old Cal got a talking to at the dinner table for his dabbing antics.

Keep slaying, Cal -- America is behind you.

Now is a good time to reflect on arguably the most iconic dab of last year. There have been so many, but one person in particular stole the show.

It was Mr. Peanut during the Macy's Thanksgiving parade. Look at him crushing it, then tell me that's not the best thing about 2016.

Citations: The 'dab' makes an awkward comeback and Paul Ryan learns it's not a sneeze (Washington Post)