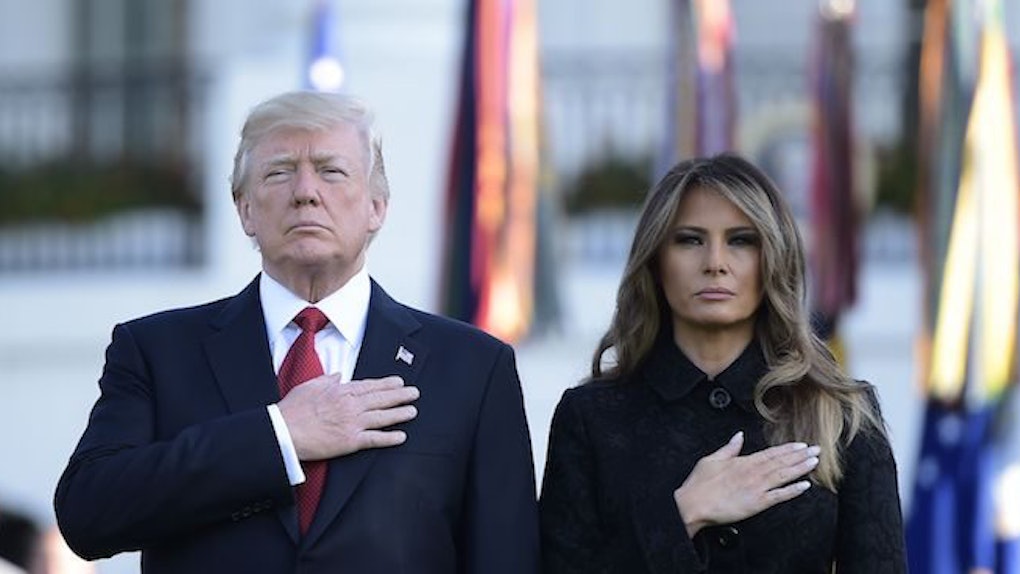 On the 16th anniversary of the attacks on New York City's World Trade Center, everyone took a moment to remember the national tragedy which changed the face of America forever. President Donald Trump spoke from the Pentagon, accompanied by First Lady Melania Trump, and later tweeted out a video in tribute to the victims of the tragedy. The one big problem? Donald Trump's 9/11 “tribute” video is just all shots of him. And occasionally, an American flag.

The video, which Trump tweeted out on Monday afternoon, was captioned, “May God Forever Bless the United States of America. #NeverForget911.” It shows an American flag at half-mast over the White House as “Taps” plays. The shot fades into ones of Trump and the First Lady walking across the White House lawn, of Trump placing a wreath of flowers on a display, of Trump speaking at a podium, and finally, of Trump staring at an American flag.

What's not there? A reference to the victims, the first responders, the tragedy itself. Nowhere are there images from the tragedy, or even of New York City, or the Pentagon, or Somerset County, Pennsylvania, where the planes crashed. The closest thing we get is a shot of a woman's hands holding a bouquet of white roses, with a man's photograph on a lanyard around her neck. Taken from a distance, you can barely make out the photo.

Jesse Lehrich, the communications director for Organizing for Action, a progressive advocacy group associated with former President Barack Obama, pointed out the overwhelming distastefulness inherent in using a world-changing tragedy to self-promote.

By Monday evening, the tweet had been liked more than 4,000 times, and retweeted more than 2,900. So Lehrich clearly wasn't the only one who was thinking, how on earth do you make a 9/11 tribute that doesn't mention the tragedy??

But as we all know by now, there's nothing that Trump loves more than a photo op — unless it's hearing the sound of his own name. Are we really that surprised that he found some way to make even 9/11 all about himself?

The video was far from Trump's only acknowledgement of the anniversary.

The president and first lady observed a moment of silence on the White House lawn on Monday morning, and Trump delivered a speech at the Pentagon earlier in the day which did, in fact, mention the victims. He said,

For the families with us on this anniversary, we know that not a single day goes by when you don't think about the loved ones stolen from your life.  Today, our entire nation grieves with you and with every family of those 2,977 innocent souls who were murdered by terrorists 16 years ago.

However, there were some who saw the whole thing as lip service to the tragedy.

Trump's taken plenty of criticism for his response to the 2001 tragedy, both now and previously. For one thing, he took heat for discussing the height of his Trump-branded buildings, including his landmark property at 40 Wall Street, immediately following the attack. At the time, he told news station WWOR,

Keep in mind that this is the same day the towers collapsed. The dust cloud was still visible. People were still trying to get news of their loved ones.

Trump also was criticized during the 2016 presidential campaign for refusing to come out in support of first responders.

Trump repeatedly dodged questions on whether or not he supported the James Zadroga Act, a law passed in 2010 to fund heath care for some 70,000 first responders who had become ill as a result of their heroics.

In October 2015, the law was about to expire, leaving those who had sacrificed their health out in the cold. Advocates drafted letters to Trump, who had already declared his presidential candidacy, asking for his support in getting the bill renewed. Trump did not return multiple letters and calls on the subject, ABC News reported.

Rich Alles, a deputy chief with the New York City Fire Department, called Trump out on it at the time. He told ABC News,

When we needed him on important legislation, he couldn't respond back. It was a simple yes or no question.

So, yeah. This video is not likely to help matters, is what I'm saying.