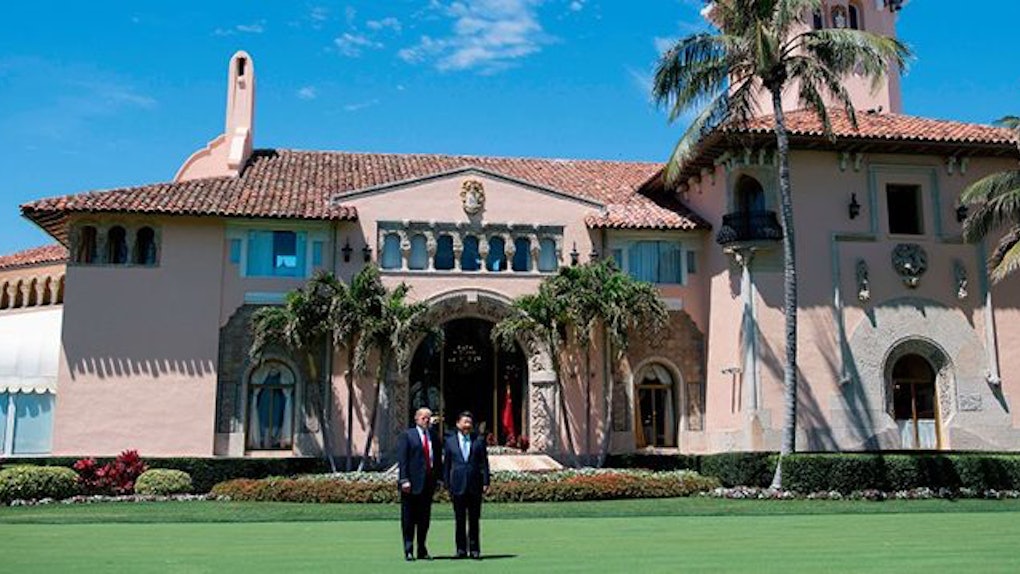 Will Mar-A-Lago Be Hit By Irma? This Is What Might Happen

With Hurricane Irma on course to impact Florida by the weekend, the storm is projected to hit close to home for President Donald Trump, literally. One of Trump's most notable properties, Palm Beach's Mar-A-Lago, has been evacuated as the luxury resort prepared to be met by hurricane force winds. At this point, the question is not will Mar-A-Lago be hit by Irma, but how hard?

The safety and security of [Mar-A-Lago] guests, members and colleagues is our top priority, and we are closely monitoring Hurricane Irma.

Of course, neither of the guests to which the spokeswoman referred will actually be at the private club once the storm actually hits. The Trump Org. closed Mar-A-Lago ahead of the storm, along with the Trump International Golf Club in Palm Beach and Trump National Golf Club in Jupiter, according to Politico.

The decision to close the properties follows an order from Palm Beach County officials telling begin evacuating the area by 10 a.m. on Friday, Sept. 8.

Mandatory evacuation for the entire town remains in effect. Please gather the essentials for three to four days, including clothing, medicine, important documents and communication devices. Please relocate west of US-1 until this storm passes if you do not plan to depart the county/state.

In addition, a state of emergency has been declared for the whole of Florida by both state Gov. Rick Scott and President Trump.

Mar-A-Lago is located in an area that has been placed under storm surge warning. According to the National Hurricane Center, that specific type of warning "indicates there is a danger of life-threatening inundation from rising water moving inland from the shoreline somewhere within the specified area, generally within 36 hours."

Hurricane Irma is expected to hit South Florida on Sunday morning as a Category 4 or 5 storm, carrying wind speeds upwards of 150 mph. On Friday morning, projections indicated that it was likely Irma will take the "worst case scenario" path into the Sunshine State.

Trump's Mar-A-Lago resort has survived through hurricanes before.

The structure has existed since 1927, when it was built for Marjorie Merriweather Post, a food industry heiress -- Trump later bought the club in 1985 for $5 million. Since being built, Mar-A-Lago has seen it's fair share of huge storms. Even in 1992, when the historic Hurricane Andrew cost Florida about $25 billion in damage at the time, there was relatively little damage around Palm Beach.

A former butler of Trump's told the Palm Beach Post in 2005,

This place will not move. That's why, during a hurricane, you'll always see me here. If it goes, I'll go with it.

Hurricane Irma appears to have already damaged one Trump property, with reports indicating that the president's 11-room mansion in St. Martin was torn apart by the storm. St. Martin was among the many small islands where Hurricane Irma first made landfall. The storm wreaked havoc on Barbuda, where 95 percent of the island's buildings were left damaged Irma.

We know that the four most solid buildings on the island have been destroyed which means that more rustic structures have probably been completely or partially destroyed.

Afterwards, Hurricane Irma continued on a path that saw it inflict varying amounts of damage on Puerto Rico, the Domincan Republic, Haiti, and Turks and Caicos, among others.

As the storm turns towards Florida, and one Trump property having already been reportedly damaged, time will tell whether Irma will significantly impact another this weekend.