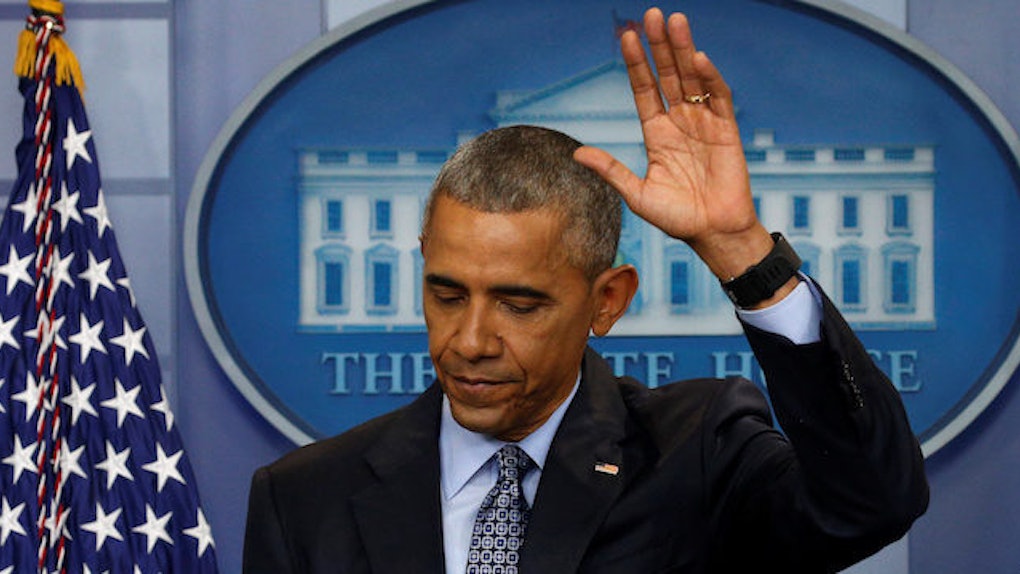 President Obama gave America one final dose of his quintessential optimism in a thank you letter to the country sent out on Thursday morning.

Obama accomplished a lot as president, but also definitely faced a number of challenges throughout his tenure.

He came into office amid two wars and the worst economic disaster since the Great Depression.

He faced a great deal of opposition from Republicans in Congress.

He gave far too many speeches on heartbreaking instances of gun violence.

There were even times when his patriotism and his nationality were questioned — including by the man who's succeeding him.

In spite of all this, he never lost his faith in this country or its people.

Obama wasn't a perfect president. There's a lot you could criticize him on.

But it's hard not to admire his unwavering belief in the American experiment.

It's tradition for the president to leave a parting letter for his successor in the Oval Office.

While Obama plans to do this for Donald Trump — who is set to be the 45th president of the US — he wanted to say thank you to the American people one last time before he did so.

His words offer a sense of hope as America transitions to the era of Trump.

A lot of people in the US are definitely apprehensive about their next leader, and it seems President Obama wrote this letter in an effort to reassure everyone that this is not the end of the world.

If Trump's rhetoric, policy proposals and cabinet picks have you worried, you're definitely not alone.

Based on Trump's demeanor both during his campaign and since he's been elected, many Americans feel very pessimistic or uncertain about his impending presidency.

But it's clear that Obama still believes the future is bright for this country for a very simple reason: the spirit of the American people.

Throughout these eight years, you have been the source of goodness, resilience, and hope from which I've pulled strength. [...] I've seen you, the American people, in all your decency, determination, good humor, and kindness. And in your daily acts of citizenship, I've seen our future unfolding. All of us, regardless of party, should throw ourselves into that work -- the joyous work of citizenship. Not just when there's an election, not just when our own narrow interest is at stake, but over the full span of a lifetime. I'll be right there with you every step of the way. And when the arc of progress seems slow, remember: America is not the project of any one person. The single most powerful word in our democracy is the word 'We.' 'We the People.' 'We shall overcome.' Yes, we can.

In short, the president is confident the country will be OK moving forward because of you.

And while he will no longer be president after today, Obama will now take on what he has consistently referred to as the most important role in our country: citizen.

So, Obama is not leaving us. In a way, he's actually joining us.