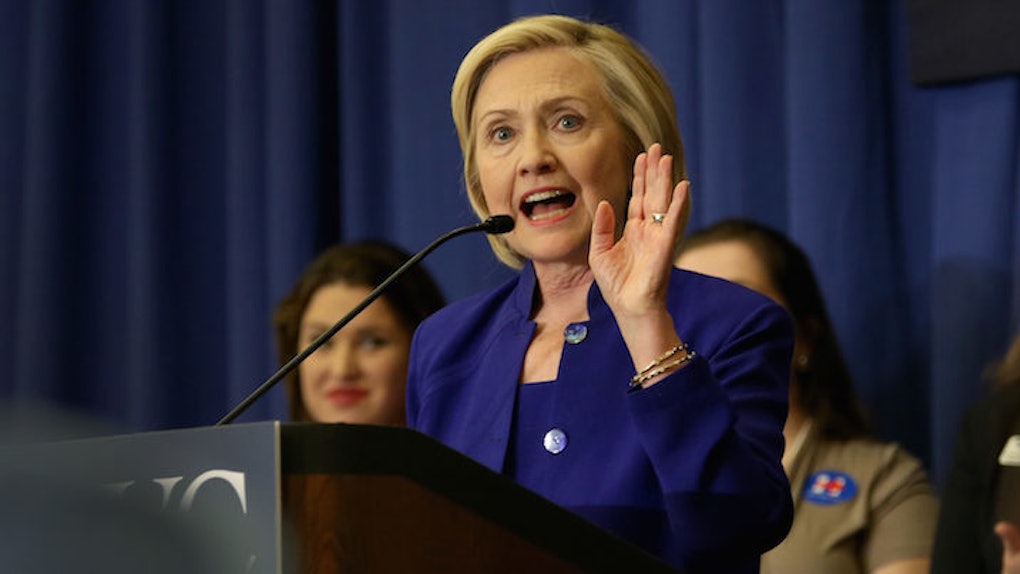 Recently, an article was published here on Elite Daily about why Millennials want Hillary Clinton in the oval office. I thought this sentiment couldn’t be more far removed from reality.

Yes, Hillary is a woman. As a feminist myself, there is nothing I want more than a woman as president. It’s 2015, so I think it’s about time.

But, to the non-informed Millennial, this might be the only reason he or she wants Hillary for president. However, that’s not good enough. Please, for the sake of our nation, do not vote for Hillary just because she has ovaries.

Let’s look at the facts. These are the reasons (informed) Millennials do not want Hillary for president:

1. She panders to popular opinion.

I don’t think Hillary actually knows what she wants or who she is. She continues to flip-flop on major issues, and seems to only agree with whichever opinion is most popular with the public at the time.

Remember when Hillary was against gay marriage? As late as 2004, then-Senator Hillary Clinton stood on a podium and spouted:

It wasn’t until 2013, when pressed by an NPR interviewer, did she give her half-hearted (can we call it support?) support of gay marriage. “For me, marriage had always been a matter left to the States,” she said, eventually going on, “[I] fully endorse the efforts by activists to work state by state.”

It seems odd that just two years ago, she still couldn’t come out and say she supported gay people, that is, until she started her bid for president. Suddenly, she’s acting as though she’s been behind them all along.

Proud to celebrate a historic victory for marriage equality—& the courage & determination of LGBT Americans who made it possible. -H — Hillary Clinton (@HillaryClinton) June 26, 2015

But let’s look at some other issues. How about the decriminalization of marijuana?

As Hillary already knows, we youngins’ are the ones she has to win over. In her failed 2008 campaign, she was not in favor of marijuana legalization. Currently, though, her views have become more convoluted as she refuses to take a stance.

Yes, Hillary has come out with a very detailed plan to address the rising cost of tuition. But is it the best plan out there? Hillary claims, “Debt won’t hold you back.” When looking at her plan, though, I believe it still could.

According to her plan, “Families will do their part by making an affordable and realistic family contribution.” Ehhh, I’m pretty sure not all families can afford to make any payments at all, especially the ones living paycheck to paycheck.

It then says, “Students will have to do their part by contributing their earnings from working 10 hours a week.”

So, if I’m going to school, I’m going to be required to work 10 hours a week also? And the money I make doesn’t go to me, it goes to the school? Welp, there goes my plan of graduating within three years.

But maybe she has a better plan for those of us already drowning in debt. According to her plan, we would be able to refinance our loans at current rates. Okay, okay, it’s not that much lower, but it’s something.

The plan goes on to say we could save $2,000 over the life of the loan. Whoa! A whole two grand! I can finally afford the down payment on that house now! Thanks, Hillary!

If this were the only plan any candidate had proposed, it would look pretty good. Fortunately, for us, we have Bernie Sanders.

Bernie’s plan is based on models from countries like Sweden, Denmark and Norway, and promises absolutely no payments from families, no 10-hour workweek on top of course loads and interests rates lower than the current rates.

We’re (hopefully) all aware of Hillary’s bad decision to support the Iraq War during Bush’s reign. That poor choice has been following her for a decade now.

It sank her 2008 campaign, and is still hurting this one. She admits she made a mistake in backing the war, and testifies that she was lied to. But has she learned from this mistake? You’d think so. But I’m not convinced.

In an interview with The Atlantic, Hillary criticizes Obama for being overly cautious when it comes to foreign policy. Ever since the Iraq War, it is no question why we are hesitant to put boots on the ground.

But Hillary thinks we need a more hands-on approach. She cites the Syrian rebels as a failed cause. Even though we did provide them with firepower, to her, we didn’t do enough.

Hillary’s plans for the country seem a bit hawkish for Millennials, who advocate peace and keeping our noses out of other people’s business.

I mean, I like a take-charge woman as much as the next gal, but maybe Hillary should spend more time rehashing that higher education plan than worrying about which country we're going to invade first.

Boy, it sure seems like Hillary does not have our best interests at heart. She's insincere, confusing and outdated.

Wait, hold on, I think there is.