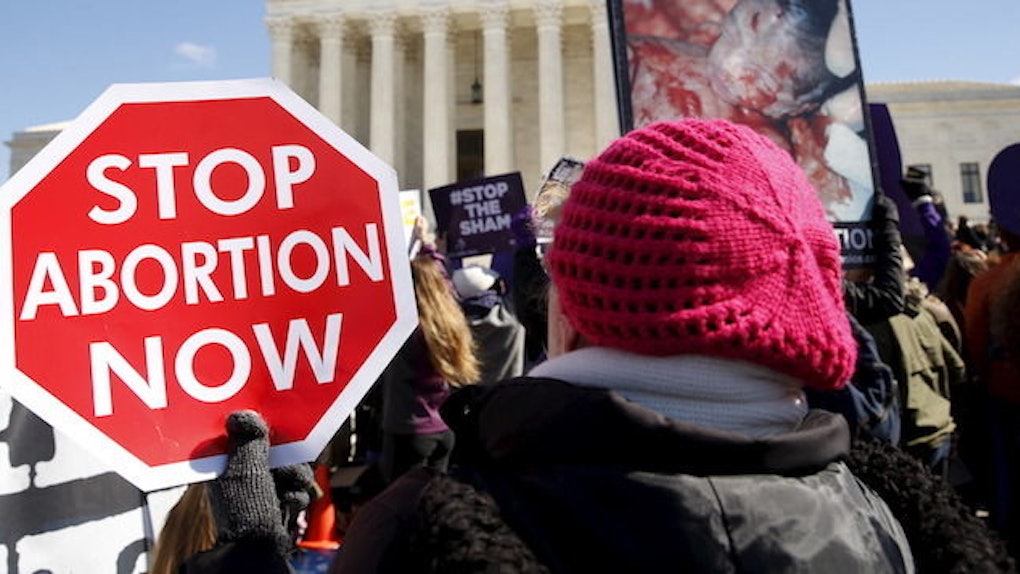 It's 2017, and people are still afraid to call themselves feminists.

The basic speech (and widespread view) I recite when I sense anyone is apprehensive about the label is simply this: Feminists believe men and women should have equal rights.

But it appears feminism is so much more complex than that.

This has been made clear in the recent debate between pro-choice and pro-life "feminists" regarding the Women's March on DC.

This Saturday, around 400,000 people are expected to march in solidarity with women's rights. On its various social media channels, the organization toted around the word "inclusive" when describing the march, therefore inviting all walks of life, sexual orientations and backgrounds.

But after the organization partnered with the pro-life Texas women's group New Wave Feminists, an outcry quickly ensued.

The "New Wave Feminists," who have about 1,000 followers on Twitter, believe the freedom and choices women have made in our society so far can often lend themselves to "excusing" poor behavior.

This most notably means this group of feminists is entirely pro-choice, and in huge disagreement with the majority of self-proclaimed feminists.

The about page of the New Wave Feminists website states:

Sometime before we were born, our womanhood was traded for a handful of birth control pills, the "privilege" to degrade ourselves in Playboy and the "right" to abort our children.

The New Wave Feminists group also believes that by allowing abortion, we are lowering standards for women to evade responsibility –similar to absent fathers – instead of lifting up both sexes and empowering them to accept their responsibilities.

The website fails to acknowledge the fact that being pregnant is a medical issue, and that there is no restrictive equivalent to pro-life laws that applies to men in state and national governments.

The US maternal mortality rate has been on the rise since 2000. The fact that this number has risen over the past 15 years is shocking for a developed nation.

According to Time magazine, "Between 2000 to 2015, Texas saw a spike in maternal mortality while the state also underwent changes to reproductive health services, including the closure of several clinics offering abortions and other services."

It appears, if the true definition of feminism is about freedom, then the freedom to be a mother – or not – must be part of its mission.

More so, the freedom to have access to birth control is often restricted in tandem with abortion access, creating a two-part monster that will never fail to stop chasing itself in circles.

The Women's March organization responded to the controversy by dropping the New Wave Feminists as partners and releasing the following statement:

The anti-choice organization in question is not a partner of the Women's March on Washington. We apologize for this error.

Many "new wave" feminists have been critical of the partnership removal, arguing that Trump is dividing the nation enough as it is: We shouldn't also divide feminism.

Isn't that the irony of how Donald Trump is president right now? We kinda shove people down and make them take their weird beliefs and put them in a closet versus having open dialogue. I'm definitely a Never Trumper, so I'm not saying that like it's a good thing. I'm just saying, have we not learned anything from this?

Supporters of the partnership pull argue having a partner supporting a law that harms women is "horrifying."

The argument that mothers are "immoral" for aborting their babies is often the response to claiming the government is "immoral" for trying to control women's lives in a Constitution founded on freedom.

More so, it seems both sides need another debate weapon in their note cards: the fact that restrictive abortion laws often include deliberate distribution of misinformation and a life of poverty for the family forced to have a baby they couldn't afford.