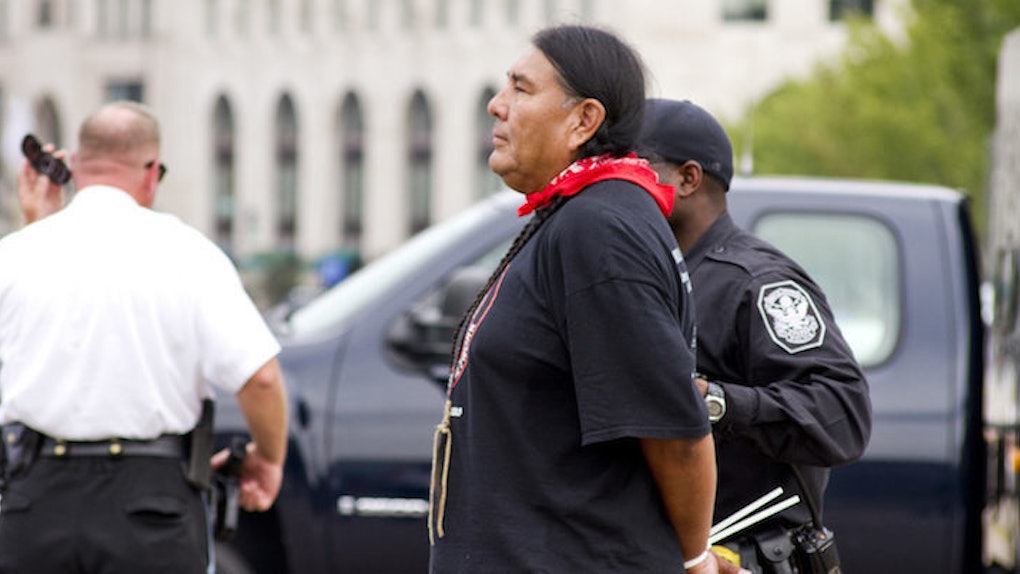 Police killings have been one of the most frequently discussed topics across the media and public over the course of the past year.

This has largely been a product of a series of high-profile police killings involving unarmed African Americans.

These consecutive incidents have reinvigorated conversations surrounding the persistence of racism in the United States and its impact on the criminal justice system.

The numbers surrounding police killings in America are certainly disturbing, particularly when compared to those of other nations.

This year alone, US police have used lethal force against 683 people, killing blacks at a rate almost four times higher than whites.

Combined with the fact blacks are also pulled over, arrested and imprisoned at much higher rates, this data is emblematic of a much broader problem.

But the killing of a 35-year-old named Paul Castaway by police in Denver, CO, on July 12 reveals a related issue seemingly absent from media coverage and public discussions: the disproportionate rate at which Native Americans are killed by police.

Castaway was a Rosebud Sioux.

According to the Center on Juvenile and Criminal Justice (CJCJ), a nonprofit that conducts research on issues pertaining to incarceration and criminal justice:

The racial group most likely to be killed by law enforcement is Native Americans, followed by African Americans, Latinos, Whites and Asian Americans.

The CJCJ reached this determination by examining data from the Centers for Disease Control and Prevention and the National Center for Health Statistics.

It revealed between 1999-2011, Native Americans were killed at a higher rate than any other racial group.

To put this into perspective, Native Americans make up less than one percent of the population, but comprise around two percent of police killings.

What's more, they make up three of the top five age groups that cops use lethal force against:

Police claim they were motivated to use force against Castaway because he was coming toward them with a knife, an assertion disputed by witnesses and relatives, Mother Jones reports. According to them, Castaway had the knife pointed toward himself.

Castaway's mother, Lynn Eagle Feather, also claims he suffered from schizophrenia and alcoholism, so it seems his killing is also linked to another disturbing trend: the use of the lethal force by police against the mentally ill.

There's evidence around half of all those killed by police every year suffer from mental illness. This issue is also arguably not granted sufficient attention.

With that said, Al Jazeera notes, Castaway had a criminal record, including felony weapon possession, assault and DUI. He also served time.

Even still, some feel the death of Castaway is a product of history and prejudice. Speaking with Mother Jones, Chase Iron Eyes, an attorney with the Lakota People's Law Project in South Dakota, stated:

You can tell [the police are] shooting out of fear. If it's not out of hate, for some reason they're pulling the trigger before determining what the situation actually is. Something does need to happen. Somebody does need to take a look and we need help.

When viewed in the context of US history, it's very telling this issue and the unsettling numbers surrounding it hasn't garnered more attention.

Correspondingly, Glenn Morris, an associate professor at the University of Colorado and leader in the American Indian Movement, contends:

One of the disturbing things about the history of Colorado is that that legacy continues to be memorialized all the time. If you take a stroll through downtown Denver, you'll see monuments that continue to lionize and create heroes of Indian killers. So the continuing legacy of anti-Indian sentiment — while it may not be as vicious and overt as it once was — the fact is, that American Indians remain at the bottom of every socioeconomic indicator in the city. Those are the ironies that lay the foundation for a disaster like Paul Castaway being unjustifiably killed by the Denver police.

But Denver is not unique in this regard. According to Pew Research Center, one in four Native Americans and Alaska Natives are living in poverty. This has hardly been made a priority by the government, and this neglect has translated into extremely especially difficult lives for Native American youth.

America has consistently glossed over or ignored the habitual and systemic oppression and marginalization of Native Americans.

To borrow from President Obama,

The history of the United States and tribal nations is filled with broken promises.

As a country, if we don't begin to pay more attention to the historic and continued plight of Native Americans, it will only add to an already bleak and shameful narrative.

We could begin by ensuring their inclusion in conversations surrounding police brutality and the use of lethal force by law enforcement.