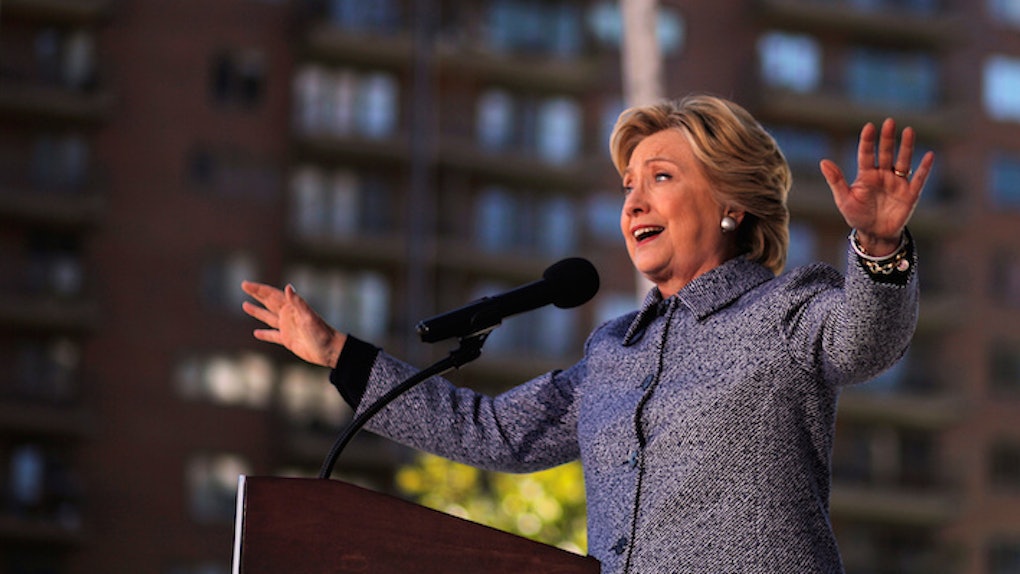 Stop Trying To Shame Millennials Into Voting For Hillary

First of all, please excuse me for addressing you in such a broad and generalizing way.

But since a large number of you continue to place my generation in boxes, I feel comfortable affording you the same courtesy.

It seems like every other day I read a new article or encounter another tweet highlighting the ways in which Millennials basically signify the onset of the apocalypse.

But this seems to be especially true in terms of the election.

First, you were angry at us for supporting Senator Bernie Sanders.

You lectured us about socialism and portrayed us as naive for backing the campaign of a man with what you frequently characterized as impractical economic and social goals.

You lambasted us for potentially hurting Hillary Clinton's chances of winning the Democratic nomination.

How dare we have an opinion about the future of the country, right? The utter audacity.

When we don't vote, you criticize us for our political apathy.

When we do finally get interested in politics, you condescend to us because we're not adhering to your terms.

You're the generation that started the disastrous War on Terror and induced the greatest economic calamity since the Great Depression, but apparently we're the problem.

You shamed us because most of us supported a candidate who opposed the Iraq War, wants to abolish the death penalty, champions campaign finance reform, supports universal healthcare and free college (yes, we know it's not free), advocates fervently for action on climate change and condones marijuana legalization and an end to the War on Drugs.

It's not like he's spent the majority of his life fighting for a more equitable and just society.

Now that Bernie is out the race, you're upset a significant number of Millennials are considering voting for third-party candidates.

Your trepidations are valid, but your approach is all wrong.

When it comes down to it, I'm a Millennial who agrees with many older folks in terms of their underlying concerns about young voters backing candidates like Gary Johnson and Jill Stein.

I supported Bernie Sanders and voted for him in the New York primary, but now believe Hillary Clinton is the most practical choice in this election.

While I definitely disagree with her on many issues, there's no denying she's prepared for the challenges of the presidency.

Not to mention, she's not Donald Trump.

I'm not of the opinion voting for Hillary is choosing the lesser of two evils; I believe it's a moral and logical choice.

Trump would be disastrous. In many ways, he's already done irrevocable damage to the US.

Regardless of what happens, we're going to have to deal with the toxic sentiments he's helped make more publicly acceptable over the course of this election.

Long story short, Trump is a historically awful candidate, while Clinton is the first female nominee for a major party in US history and also happens to be incredibly qualified for the job.

With that said, I agree with anyone who believes this is not the election for a protest vote. The stakes are just too high.

There are 69 million Millennial voters. We comprise the largest share of the electorate next to Baby Boomers.

Our vote matters a great deal in this election.

But if too many of us vote for third-party candidates, who don't have a realistic chance of winning, it could lead to a victory for Trump.

This is not something any rational person wants, and Millennials definitely need to think carefully about the consequences of their ultimate choice in November.

But please stop trying to shame Millennials into voting for Hillary Clinton. It's clearly not working.

Your condescension is the last way to get us to agree with you.

It's very difficult for many of us to believe you actually know better when you've created a society in which we're the most educated generation in history, yet we earn historically low wages and suffer from high rates of unemployment.

Instead of talking to us like we're idiots, I suggest taking some time to carefully consider why so many young people are so discontented with the two-party system.

Instead of accusing us of singlehandedly letting America fall into the hands of a racist, sexist demagogue, recognize that many Millennials actually have significant ideological differences with Hillary Clinton.

While it doesn't take a genius to see Clinton would make a far better president than Donald Trump, she's not infallible.

Yes, a lot of the opposition toward her is inherently misogynistic, but that doesn't mean she's not worthy of criticism.

In a recent speech directed at Millennials, Hillary said,

You want something to vote for, not just against. Even if you are totally opposed to Donald Trump, you may still have some questions about me. I get that.

If Hillary gets it, why can't you?