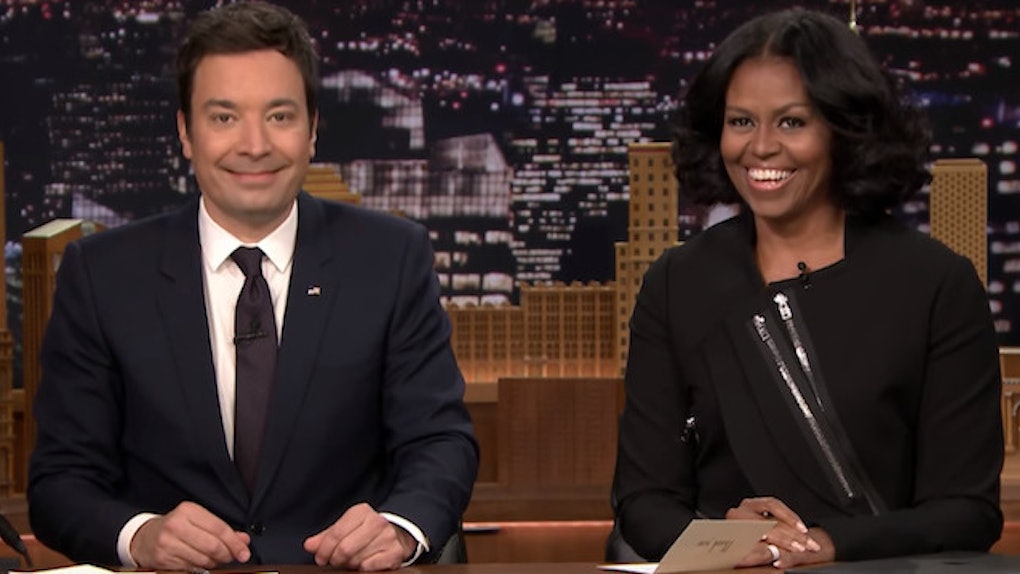 CHOO CHOO, all aboard the emotion train -- next stop: Feels City.

Michelle Obama tugged at our heartstrings last night when she appeared on "The Tonight Show Starring Jimmy Fallon" and wrote the sweetest thank you note to her husband, Barack.

As part of a sketch on the show, she penned this beautiful little memo:

Thank you, Barack, for proving you're not a lame duck, but my very own silver fox.

Lols at the "silver fox" part. When the Obamas first took office, Barack wasn't silver. Guess that's what eight years running the country will do to you.

Jimmy got involved, too -- he was writing a thank you note to the FLOTUS.

Thank you, Michelle Obama, for bringing a whole new meaning to the phrase, 'the right to bear arms.'

A photo of her flexing was then shown. He went on to write,

Thank you, Mrs. Obama, for being a strong, smart, independent woman, an activist, a style icon and a great dancer -- showing us all what it would look like if Beyonce married a much nerdier Jay Z.

Then he concluded with a request we'd all like to back. He asked,

And finally, thank you, Mrs. Obama, for always promoting physical fitness. And hey, since you like exercise so much, how about running for president?

Stevie Wonder made a special guest appearance on the show to give her a proper send off with a dedication.

The FLOTUS reduced the world to tears on Tuesday night when she posted a throwback photo of her family with a caption dedicated to Barack on her Instagram, after his farewell speech.

So proud of POTUS and all that we've accomplished together. What an incredible journey filled with remarkable people. I love you Barack. -mo‎‎

Barack could barely keep it together when he said his goodbyes and paid tribute to his wife. He said,

You made the White House a place that belongs to everybody. And a new generation sets its sights higher because it has you as a role model. You've made me proud, and you've made the country proud.