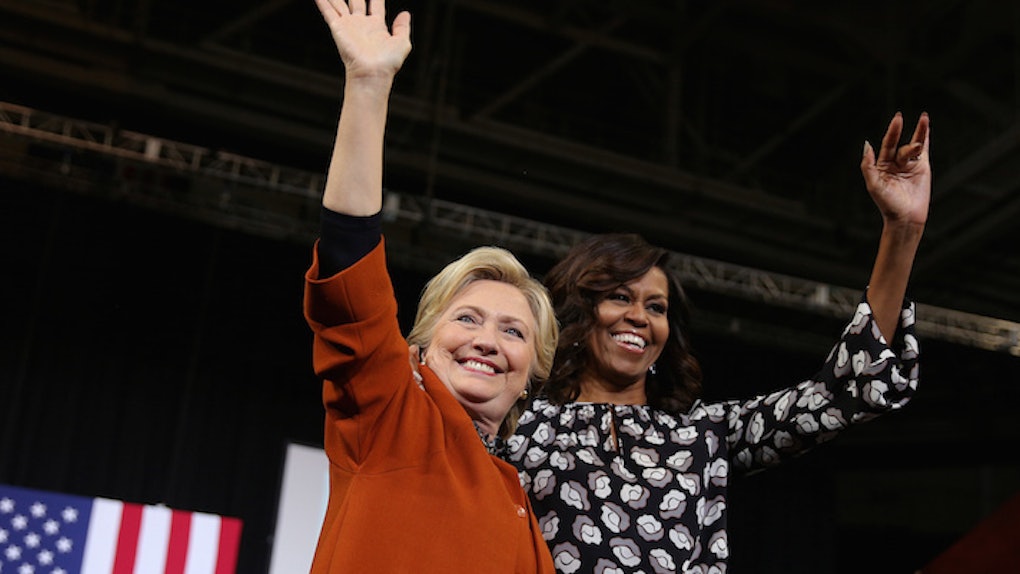 Michelle Obama is the light in a very dark and depressing election.

While Hillary Clinton was delivering a speech on Thursday, the first lady showed off some epic dance moves.

It's one of those small moments in life that makes it easier to carry on in this cold, unforgiving world.

During her speech, Hillary Clinton asked an important question about Obama.

The answer is quite clear: nope.

The first lady has emerged as Clinton's most impactful and inspiring surrogate in the final weeks leading up to Election Day.

She's been heavily critical of Donald Trump and delivered a number of powerful speeches on behalf of the Democratic presidential nominee.

On Thursday, she continued this trend.

This was the first time Obama appeared alongside Hillary Clinton.

At the rally, which occurred at Wake Forest University in North Carolina, Obama stated,

It takes a level of generosity of spirit to do what Hillary has done in her career and her life for our family, for this nation. And if people wonder, yes, Hillary Clinton is my friend, she has been a friend to me and Barack and Malia and Sasha, and Bill and Chelsea have been supportive from the very day my husband took the oath of office. So I am grateful for Hillary, for her leadership, for her courage and for what she is going to do for this country.

Michelle Obama has one of the highest approval ratings of any Democratic political figures in the country. According to a recent Fox News poll, the first lady has a 59 percent positive rating overall and a 95 percent favorable among Democrats.

During her speech on Thursday, Obama once again rebuked Donald Trump and characterized him as someone who is completely unfit for the presidency.

Clinton currently has a significant lead over Donald Trump in the polls (all of them).

Between that and having Michelle Obama in her corner, things are looking pretty good for the former secretary of state.