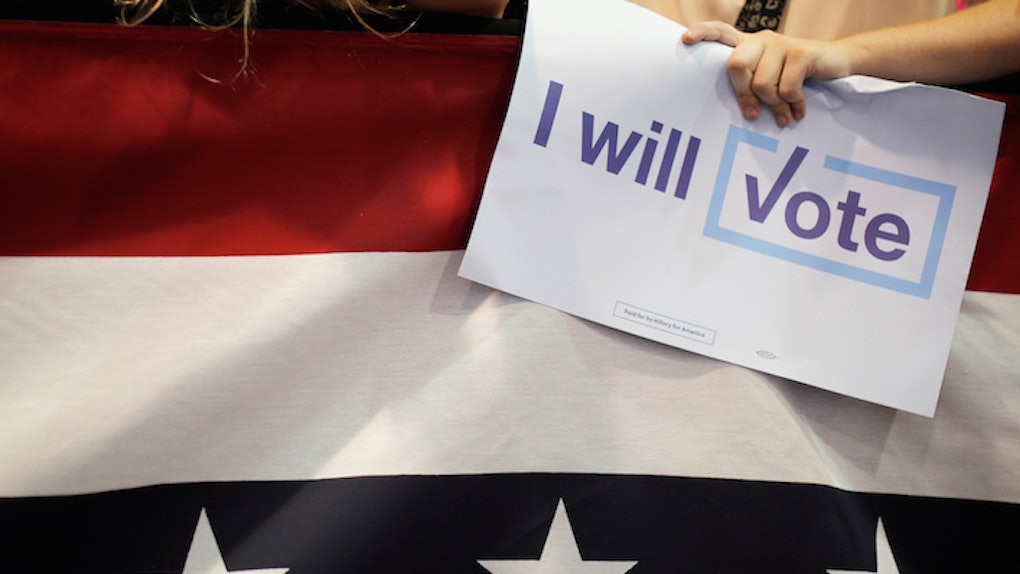 Tuesday is National Voter Registration Day, making it the perfect time to discuss the importance of voting.

There are 41 days until the general election. If you're not yet registered to vote, you still have time.

The importance of voting cannot be overstated. It's our most fundamental right and duty as citizens. That's a very loaded statement, however, and doesn't get to the heart of why voting is so vital to all of our lives.

If you're on the fence about voting, I strongly urge that you reconsider.

Here are 10 reasons why you should vote this November — and in every election after that, for that matter.

1. Your vote does matter.

Don't let anyone tell you your vote doesn't count.

There are certainly aspects of our voting system that necessitate reform, and it's very antiquated in many ways. We definitely need to work to expand voting access and voter rights.

It's OK to be a little cynical about US politics, but don't be fooled into thinking your vote doesn't matter.

Voting is a way of ensuring the issues you care about are granted attention. When you don't vote, you give politicians an opportunity to ignore what matters to you.

2. When you don't vote, you're letting other people speak for you.

You want to shake up the status quo?

If you don't participate, nothing changes.

In the 2014 midterms, Millennials comprised just 13 percent of the electorate. Imagine what Congress might look like if this exceptionally large and diverse generation actually participated in that election.

3. A lot of people have fought hard and sacrificed a great deal for your right to vote.

Women and minorities have had to fight a lot of battles in this country in order to obtain, expand and uphold their right to vote -- and they continue to.

It's an insult to their struggles to not vote.

Not to mention, there are around 6 million individuals who will be barred from voting in November because of felony convictions on their records, according to the Sentencing Project.

Felony disenfranchisement is linked to America's long history of racism.

Eric Holder on Felony Disenfranchisement from Loteria Films on Vimeo.

Vote for the people who've been robbed of the chance to be heard by their government.

4. 69 million Millennial voters could make or break this election.

Millennials compromise the largest share of the electorate next to Baby Boomers, and could have a massive impact on this election.

But, historically, voter turnout among this generation has been poor. Millennials have an opportunity to reverse this trend in November.

5. There's a lot at stake in this election.

Anyone who's been watching the news on a semi-consistent basis for the past year knows this is a historic election.

This isn't just because of who the candidates are, but because of the issues we currently face as a nation: unemployment, student loan debt, police brutality, immigration reform, climate change and so much more.

Don't sit on the sidelines.

6. The next president could reshape the Supreme Court.

There is currently one vacant Supreme Court seat and three justices are either over the age of 80 or close to it.

Based on the fact Republicans in the senate refuse to hold hearings or vote on President Obama's nomination, the next president will choose at least one Supreme Court justice, and potentially several.

The Supreme Court makes decisions that set major precedents and affect the US in irrevocable ways. Reshaping the Supreme Court, in a sense, is a way of reshaping America.

This is yet another reason to vote and think carefully about your choice.

7. There's no excuse to not vote if you're eligible.

If you're eligible to vote, there's really no excuse to not exercise this right.

Perhaps the worst excuse is not feeling "informed enough" to vote.

A 2014 HuffPost/YouGov poll showed 60 percent of Millennials felt only well-informed citizens should vote.

Given the abysmal voter turnout among Millennials, it's not unfair to conclude many young people don't feel they know enough to vote.

Actually, Jamie Kravitz wrote an entire article about this for xoJane: "UNPOPULAR OPINION: Most Millennials Aren't Informed Enough to Vote, Myself Included."

I'm sure this was a well-intentioned article, but there are two major reasons why she's wrong.

One, Millennials are the most educated generation in history.

Two, we are notorious for being glued to our smartphones, which are literally palm-sized computers with grant us unprecedented access to information.

On top of being the most educated generation in history, we also happen to be earning historically low incomes. Not voting certainly won't help in that regard.

Have you ever heard anyone tell you that if you don't ask for a raise, you'll never get it? Well, consider voting a way of asking the government to fight for an economy that actually helps you.

Millennials are the last generation who should ever claim they aren't "informed enough" to vote.

When you don't vote, you're giving up your say in the country's future.

Noting voting means you can't complain if your preferred candidate wasn't elected, if the issues you care about are ignored and if the country is a mess in the future. You did nothing to prevent any of it.

9. Voter turnout in the US is embarrassing. We can do better.

In 2012, just 58 percent of eligible voters in the US participated in the election. This is a pitiful level of voter turnout for the world's oldest democracy.

We can and should do better if we truly want to establish a government that's representative of the American people.

10. Registering to vote has never been easier.

You can register to vote online. It only takes a few minutes. Don't hesitate. Just do it.

If you're confused about the steps it takes to vote, click here. If you want more info on National Voter Registration Day, click here.