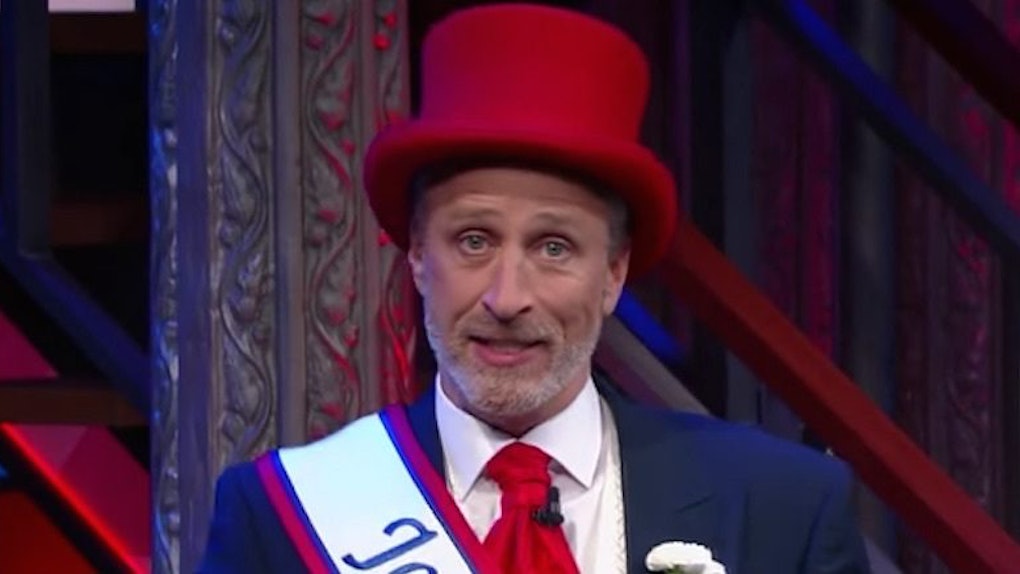 Jon Stewart may not have been around a lot during this election cycle, but he showed up when it counted -- the night before the election.

On Monday night, he joined Stephen Colbert to dump on Donald Trump one last time, and it was hilarious.

It all started with a little girl crying and singing about how she's afraid to vote.

Colbert tried to calm her, but Stewart eventually interjected and said,

There's nothing in the law that says the people have to vote. Let the child do what she wants, don't stuff voting down her throat.

But then Colbert reminded him of how crazy this election has been, and everything that's at stake,

Listen Jon, this has child has got to vote! Jon, do you remember who is running this year?

The former host of the "The Daily Show" looked shocked, and screamed,

After a few more theatrical moments, Stewart started yelling at the little girl that she had to vote.

The little girl then started singing about how there aren't any good options in this election, so she just wants to abstain from voting at all.

She made such a convincing case, Colbert and Stewart appeared bewildered and unsure of what to do.

But then "Hamilton"' star Javier Muñoz ran in to save the day and rapped about “not throwin' away your shot” this election "because history has its eyes on you."

Colbert and Stewart were ultimately swayed by Muñoz's rap, and then Stewart followed the Broadway star's example and did some rapping about how awful Trump is,

He acts real tough, but he's a wussy. He'll probably fill the court with Gary Busey. And then he'll grab your mother's… kitty cat. Meow.

Oh, Jon Stewart, we have missed you.

The moral of the story here?

Don't sit this election out. There's too much at stake. VOTE.